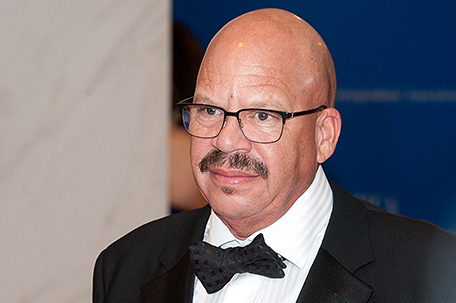 According to the Hollywood Reporter, Penn Jillette says he knows for a fact Mark Burnett possesses tapes of President Donald Trump saying disparaging, racist remarks while working on the NBC reality show, Celebrity Apprentice. The other half of the magician duo Penn and Teller (who appeared on Celebrity Apprentice in 2012) recently told Vulture that he is positive recordings exist because “I was in the room” when Trump would say “racially insensitive things that made me uncomfortable.” Former White House staffer and reality star Omarosa Manigault Newman said she heard the tapes, which allegedly include Trump using the N-word during the production of the NBC series which the president hosted. Omarosa is currently promoting her new book “Unhinged.” Trump is denying the tapes exist and in an awful tweet called Omarosa a “dog.”

For multi-talented performer Chas Bronxson, it took one listen to never-before-heard R&B group, alongside the classics, for him to pay homage. That led to his latest releases, just in time for this summer’s Black Music Month, which was celebrated in June. Starting that month-long celebration with “Group H.U.G.S” (Honoring Unforgettable Groups of Soul”), the single and video preceded a weekly drop of soul-stirring new videos. Playing on actor Charles Bronson’s name, Chas Bronxson’s twist is on being a Bronx native son, with an equally tough message in his music.

The United Negro College Fund is presenting “A Mind Is” Hampton Summer Benefit at the home of Nancy Silberkleit in East Hampton, New York, on Saturday, August 18, 2018. The evening will be co-chaired by Celebrity Author/Philanthropist Jean Shafiroff and Gregory Lowe II. CNN News Anchor Don Lemon will serve as Master of Ceremonies. The fun  will continue for brunch on Sunday, August 19, 2018 at Bay Kitchen Bar in East Hampton. Honorees are the esteemed Johnnetta B. Cole, Ph.D and Edward Lewis…….

Tom Joyner, host of the nationally syndicated Tom Joyner Morning Show, and Allstate Insurance Company are celebrating the importance of family fun for every generation at the 2018 Allstate Tom Joyner Family Reunion. The prominent event, now in its 16th year, will be held at the Gaylord Palms Resort & Convention Center in Kissimmee, Florida this Labor Day weekend August 30-September 3, 2018…….