The Kodjoes are coming to daytime television with new talk show 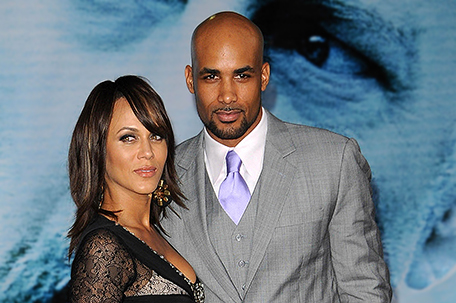 The world’s most gorgeous and nicest couple, Boris Kodjoe and Nicole Ari Parker, were spotted making their way through LAX last week.  The Kodjoes are coming to daytime television with a brand new Talk Show called “The Boris & Nicole Show,” which premieres July 6. The show will be on stations that will include Fox outlets in New York and Los Angeles.  The pair aim to focus on lifestyle and topical issues, as well as featuring celebrity guests.  Said Boris: “We met and fell in love on screen so any time we get to work together, we know it will be a lot of fun.”………….

Jay Z’s cousin, Jamal White is opening Buffalo Boss at 17 West 125th Street in Harlem in mid-July.  The Brooklyn based franchise will be a sit-down eatery. White told DNA Info New York: “I think Harlem is one of those neighborhoods that are like the heartbeats of New York and we really wanted to establish our brand in the cool and interesting neighborhoods around the city.”  No word yet on when Jay Z will visit the Harlem location. White said the rap mogul normally orders delivery when he’s in town. Said White: ‘Honey barbecue, he likes that. He also likes it hot sometimes.  It depends on what he is doing.” ……………

African Pride, the premium value-priced hair care line for women and their families that offers maximum conditioning and styling flexibility made its national television debut on the hit daytime talk show “The Real.” With a line of products that promote moisture and overall hair health, African Pride is committed to initiatives that empower women. The brand is teaming up with non-profit organization Dress for Success as a major sponsor for 2015. The “Get Your’ Do interview Ready” segment on “The Real” features hair makeovers for two deserving women as they strive towards their career goals. The segment also features tips for maintaining your hair during the warm and humid months of summer. Celebrity stylist Tasheara Neshell, whose clients include Academy Award-winning actress Jennifer Hudson, styled each woman with African Pride’s Olive Miracle and Shea Butter Miracle Maintenance lines…………..

According to Variety, George Takei gave a brief update on Nichelle Nichols, who suffered a minor stroke on June 3. Nichols’ “Star Trek” co-star Takei said she’s “resting comfortably” and is able to converse with people. They recently  did a “Star Trek” convention together just two weekends ago. Nichols played St. Uhura on “Star Trek” on TV and appeared in many of the movies. She suffered the stroke in her Los Angeles home………

“Black-ish” stars Anthony Anderson and Tracee Ellis Ross will co-host the BET Awards. “I can’t wait to see all of my peers and the amazing performances that evening,” Anthony said in a statement. ‘”We may even have a few surprises up our sleeves.” The 2015 BET Awards will air live from the Nokia Theater on Sunday, June 28 on BET……….