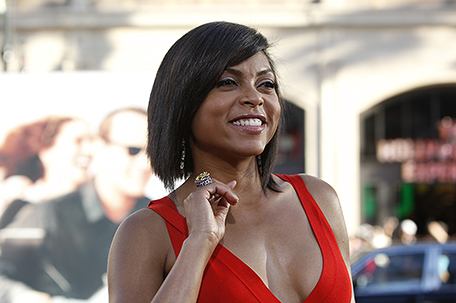 “Empire” star Taraji P. Henson will topline the civil rights drama The Best of Enemies, set up with “Empire” producer Danny Strong. Tobey Maguire and Matthew Plouffe. Henson will portray Ann Atwater, a civil rights activist in Durham, North Carolina, who battled Ku Klux Klan leader C.P. Ellis for a decade until 1971, when the two agreed to co-chair a two-week community meeting to deal with a court-ordered school desegregation decree. The event changed both of their lives immensely……………..

Sources say Idris Elba has a new TV series called “Idris Elba: No Limits.” It’s a driving show that will premiere on Discovery UK on July 6. Elba will be attempting to break the speed limit in a number of different vehicles, including his Bentley. Insiders say he has decided to take a small break from acting to achieve this boyhood dream of becoming a rally driver. In the first episode,the handsome actor takes part in the prestigious Circuit of Ireland event, one of the oldest rallies in the world……….

R&B artist Lyfe Jennings’ highly anticipated sixth studio album, “Tree of Lyfe,” is now available in stores and on iTunes. “Tree of Lyfe” was co-written and co-produced by Jennings and the majority of the album was recorded at his home studio. Jennings will make a special guest appearance on VH1’s “Love & Hip Hop” show on July 20 where his song, “Pretty Is,” will play during the show…………

Now celebrating its 10th Anniversary year, celeb favorite Philippe New York is still the go-to destination for Beijing -style cuisine. With a unique menu crafted by industry veteran Philippe Chow himself, and a stylish decor that creates an intimate and romantic environment for diners, Philippe New York offers an upscale dining experience unlike any other. The restaurant’s front bar has been revamped with a new stylish look, making it the perfect spot to gather with friends for a drink or a great place to start your meal before being guided to your table by one of Philippe’s friendly staff members……..