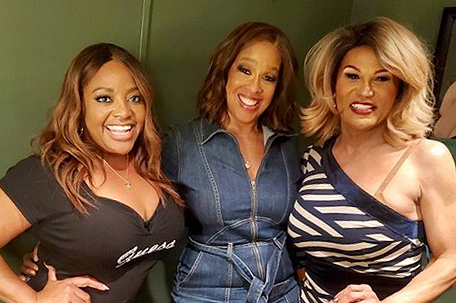 Emmy winner Sherri Shepherd hit the Big Apple a few days ahead of her scheduled guest hosting duties on “The Wendy Williams Show” to host a weekend of comedy shows on March 18 and 19 at Caroline’s on Broadway. The four sold-out shows were headlined by transgender comedienne Flame Monroe, who hosts a podcast called “Listen & Learn” on Charlamagne Tha God’s Black Effect Network. The two evenings of comedy also featured Chicago-based Damon Williams, who hosts the Martha’s Vineyard Comedy Festival. Shepherd, who is set to premiere her own self-titled daytime talk show starting in September, told the crowd that she was trying out some new material during the performances to prepare to go on tour with singers Kem and Kenny “Babyface” Edmonds at the end of March. CBS anchor Gayle King was among the audience members for one show. Attendees said the BFF of Oprah Winfrey had a good time laughing at all the comedy, and even picked up the check for her entire table at the end of the night.

New Brooklyn Nets player Ben Simmons, who was traded from the Philadelphia 76ers, was spotted having brunch with his fiancee’ Maya Jama at popular celebrity hot spot Sadelle’s, in New York City’s SoHo neighborhood. Jama is a British TV and radio personality. The couple got engaged over the Christmas holidays after seven months of dating. According to several media outlets, Simmons purchased the estimated $800,000 emerald cut diamond ring he presented his bride-to-be with on Jewelers’ Row in the diamond district of Philadelphia.

The organizers of the Oscars, which will be held March 27, are pulling out all the stops to land an iconic performance from best original song nominee Beyonce Knowles-Carter, multiple sources close to the show told Variety. While the superstar songstress hasn’t done any campaigning the past month in support of her song “Be Alive,” co-written with artist Dixson for the film “King Richard,” Beyonce’s camp has been in deep talks with producers to mount a satellite performance of the song — one that would possibly open the show, and broadcast live from a tennis court in Compton, California where Venus and Serena practiced under their dad, Richard’s watch. One possible scenario would have Will Smith, who has won six best actor awards so far for portraying Richard in the film, appear onsite with Beyonce and then jet down the road to Hollywood in time for the announcement of the best actor category……

Tongues are wagging that Kerry Washington was the epitome of glamour on March 19 as she arrived at the 33rd Annual Producers Guild Awards in Los Angeles. reports the Daily Mail. The former “Scandal” star rocked the red carpet wearing a peach satin gown with a corset top and a flowing train. Washington was a presenter at the star-studded ceremony. The Producers Guild Awards are an annual ceremony that highlights the work of producers in the movie, television and new media making processes. “Summer of Soul (…Or, When the Revolution Could Not Be Televised)” won the award for outstanding producer of documentary motion pictures.