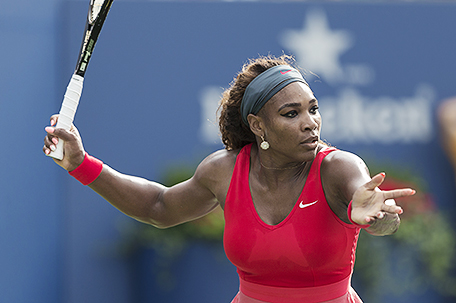 The stork was busy on the weekend of July 10–12. Golden State warriors superstar Stephen Curry and his wife Ayesha, announced the arrival of a baby daughter named Ryan Carson. Riley’s little sister was born July 10, weighing in at six pounds, one ounce. Said Ayesha: “The gift of life is truly an indescribable thing. We were fortunate enough to experience it all over again.”

Meanwhile, in the midst of all the sad news surrounding his daughter Bobbi Kristina, Bobby Brown and wife Alicia Etheredge became parents of a baby girl, who was born at Cedars–Sinai Hospital in Beverly Hills on July 11. The couple also have a five year-old son, Cassius together. The baby girl is Bobby’s sixth child and third daughter…………….

Serena Williams sparkled July 12 on the Red Carpet wearing a form-fitting pink evening gown to Wimbledon’s Champions’ dinner. Serena, who defeated Spain’s Garbine Murguruza to win her sixth Wimbledon Championship on July 11, attended the annual dinner at Guidlhall in London with fellow champ Novac Djokovic. Williams’ win completed her second Serena Slam, which is four Grand Slam Tournaments in a row, beginning with last year’s U.S. Open, then the Australian Open, the French Open and Wimbledon. Williams said: “This is a real cool time for me!”………….

According to Variety, Bishop T.D. Jakes is getting a summer test run for a new talk show from August 17- September 11 in Dallas, Atlanta, Minneapolis and Cleveland. Jakes has been flirting with a syndicated talk show launch for several years. He presides over a 30,000 -member mega church in Dallas. Says Bishop Jakes: “This show provides a great platform to expand conversations, to be encouraging, positive, uplifting and help people work through tight places in their lives.”…………

Former “Living Single” star Kim Coles married former SWAT police officer Reggie McKiver recently in the Dominican Republic. The couple were married in an intimate ceremony before 45 friends on the beach. Kim wore a strapless gown  from Della Curva, a store that makes bridal dresses for the curvy bride along with a pair of $10 silver glitter thongs from Target. The newlyweds will have a larger second wedding on August 21 that will be planned by David Tutera.…….