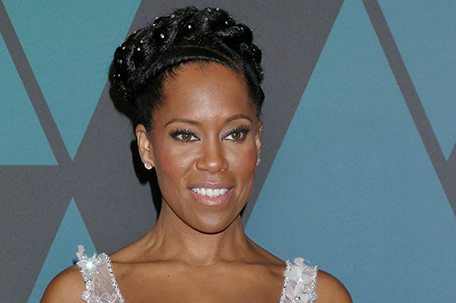 Although she didn’t win the award for “Best Director “for “One Night in Miami” at the March 7 Critics Choice Awards, Regina King dazzled in a high-slit Versace gown, Stuart Weitzman platforms and Cartier jewelry. However, “One Night in Miami” did pick up the award for Best Song with “Speak Now.” Hosted by Taye Diggs, other Critics Choice Award winners included a posthumous award for the late Chadwick Boseman for Best Actor in “Ma Rainey’s Black Bottom,” Daniel Kaluuya for Best Supporting Actor in “ Judas and the Black Messiah.” “Ma Rainey” also won in the Costume Design and Best Hair and Makeup categories…..

Tennis ace Serena Williams, a friend of Meghan Markle’s, who attended Prince Harry and Meghan’s wedding, said on Twitter that the Duchess’s words during the bombshell interview with Oprah Winfrey, “illustrate the pain and cruelty she’s experienced.” Serena added, “the mental health consequences of systemic oppression and victimization are devastating, isolating and all too often lethal.” Serena and Meghan have been friends for more than a decade. They originally met in February of 2010 at the Super Bowl in Miami. According to reports, the duo immediately hit it off and embarked on a journey that has extended for years after…………

According to People Magazine, former NBA star Amar’e Stoudemire is handing his house keys to Rick Ross. The Miami-born emcee and entrepreneur recently purchased the estate near Fort Lauderdale in Southwest Ranches in an all-cash deal after being on the market for a mere four days for $3.5 million. This is reportedly the fastest closing in the history of the Ranch Estates section of Florida. Ross also owns a 45,000 square-foot mansion in Fort Lauderdale that can be seen as the palace of Prince Akeem (Eddie Murphy) in “Coming 2 America”……….

Quarantine Date Night Alert! The lovefest between Rihanna and A$AP Rocky has moved to the West Coast. The Savage X Fenty mogul and the Harlem born rapper were spotted heading to dinner on March 7 at celeb favorite restaurant Georgio Baldi in Santa Monica, California. Rihanna looked stunning in a leopard print faux fur coat, which she accessorized with a red monogrammed Fendi bag…….