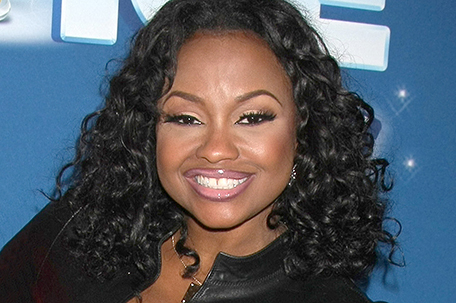 According to reports, Phaedra Parks and her estranged husband Apollo Nida’s divorce judgement was reversed by a judge. “It’s very confusing why a man who is engaged and enjoys frequent visits with his fiancee would work so aggressively to avoid ending his marriage, “ Phaedra’s rep told, Steve Honig told Us Weekly. However, he said Parks is reviewing her options with her attorney to determine the most efficient path toward ending the marriage so she can move forward and focus on raising “strong, healthy and happy children.” Sources say the judge had problems with Nida’s name being misspelled, and was worried that the jailed fraudster was led to believe he would attend future divorce hearings from behind bars, which was reportedly never an option………..

View co-host Whoopi Goldberg is one of the co-chairs for the A.R.T./New York honoring of S. Epatha Merkerson at their Spring Gala which will be held on Monday, April 3 at Tribeca Rooftop in New York City. The evening will also include an A.R.T. created original mini-musical in tribute to the award-winning actress called, “S. Epatha Merkerson: The Musical!” Merkerson has won critical acclaim for her work in theatre, television and film. She is best known for her portrayal of Lieutenant Anita Van Buren on NBC’s “Law and Order”, and she currently stars as hospital administrator Sharon Goodwin on the NBC series “Chicago Med”………

On March 24, word on the curb is rap mogul Jay Z took his three favorite ladies, his wife Beyonce’, 5-year-old daughter, Blue Ivy, and mother Gloria Carter out to lunch at Gjelina restaurant in Venice Beach, California Eyewitnesses at the posh eatery report the Carters made a grand entrance as their motorcade pulled up in front of the establishment. Beyonce’ was first to exit one of three Cadillac Escalades. Her husband rolled up right behind her in a Tesla accompanied by his mom. The Carters dined in the back of the restaurant for around an hour prior to security guards escorting them back to their vehicles. From there, the superstar crew headed to the offices of Def Jam Records where they picked up a female friend, and drove off into the California sun……….