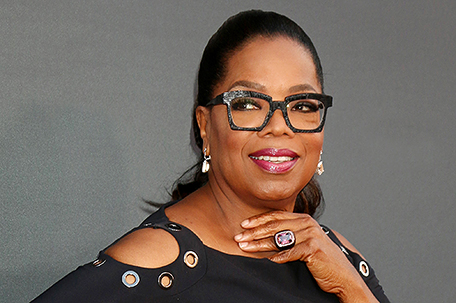 Tongues are wagging that Prince Harry has always been one to do things his own way – whether it’s giving very open interviews, publicly kissing the woman he loves, and now breaking royal tradition with his engagement portraits with Meghan Markle. Instead of just showing the world a formal engagement shot, and informal shot as his parents Prince Charles and Diana and brother and sister-in-law Prince William and Kate Middleton did, the future Duke and Duchess of Sussex also released a third candid portrait where they aren’t looking at the camera, Prince Harry’s foot is in mid-step and Meghan’s hair partially covers her face. According to Vogue.com, “It’s candid and imperfect. But already they found it worth sharing to royal admirers everywhere, perhaps because it succeeds at showing a couple very much in love.”………….

Billionairess Oprah Winfrey took to social media to warn her millions of followers that there is an imposter trolling on Instagram claiming to be her who is asking for money to sign up for OWN accounts and Instagram. On her post, smiling from her library, Oprah says: “Hi everybody. I just want you to know that somebody out there is trying to scam you using my name.” Then she sings: “It’s a fraud, it’s a fraud, it’s a fraud!” Oprah continues the post with: “Don’t believe it. Don’t give up any of your bank accounts or personal information to anybody posing as me or anyone else for that matter. And have a Merry Christmas!”………..

Celebrity philanthropist/author of Successful Philanthropy: How to Make a Life By What We Give, Jean Shafiroff, hosted her fourth annual holiday luncheon at Le Cirque on New York City’s East Side on December 19. More than 60 invitees attended the luncheon, which was held in honor of The New York Center for Children. In true holiday spirit, Shafiroff made a generous donation to the charity in honor of those guests who attended, who included Yours Truly, Prince Dimitri of Yugoslavia, former Miss America Suzette Charles, Sharon Bush, NY State Assemblywoman Rebecca Seawright, Helen Shelton, Dawne Marie Grannum, Dr. Penny Grant and Rita Cosby………..

On December 19, R&B group Xscape III joined the Caravan of Kindness and Caroling for a Cause, by spreading holiday cheer to Philadelphia, Pennsylvania, incarcerated youth and nursing home seniors. Prior to their tour stop in the City of Brotherly Love, Tiny, LaTocha and Tomika, along with Amber Noble Garland and other Philly born and raised influencers came together for a day of community service to spread holiday cheer to the area’s residents who are forgotten during this time of year. The day consisted of a surprise visit to incarcerated teenage girls in Philadelphia’s Juvenile Justice Center and Holiday caroling at Mercy Life Senior Center with nursing home resident seniors in West Philadelphia……..