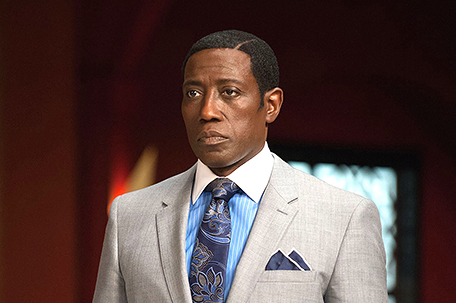 ABOVE PHOTO: Wesley Snipes in a scene from “The Player.”

According to “Variety”, it may be time for “The Player” to cash in its chips, as NBC has trimmed the episode order to nine for the low-rated Las Vegas -set crime thriller. Wesley Snipes stars in the series as the overly slick figure overseeing an elaborate high-stakes game where the wealthy gamble on criminal activity. Sources say the premise is too confusing for fans to follow……..

This Halloween, the Apollo Theater brings the spirit of New Orleans to Harlem with The New Orleans Jazz Masquerade. The weekend-long celebration of events will include a special main stage concert with Irvin Mayfield Jr., legendary jazz vocalist Dee Dee Bridgewater and the New Orleans Jazz Orchestra in the New York concert premiere of Bridgewater’s and Mayfield’s new album, “Dee Dee’s Feathers.” The masquerade themed concert will be followed by an after party as part of Apollo Music Cafe in the Theater’s Soundstage and will feature the New Orleans Go-Go brass funk band, The Brass-A-Holics. The Apollo Theatre is located at 253 West 125th Street in New York City………….

Angela Simmons was spotted at the grand opening of DHair Boutique in Dallas and the launch of SEA by Angela Simmons. In an interview, Simmons recalled meeting the 24-year-old business owner D’Andrea Harris of DHair Boutique at an event and was impressed with the entrepreneurial success she had already achieved with DHair extension line. “I knew she was someone I wanted to partner with and support having become so successful so young,” said Simmons. ………..

The Bartlett Contemporaries band kicked off their 50th year in music with a “Weekend to Remember.” The festive three-day event co-sponsored by The Thomas White Jr. Foundation, Greater Jamaica Development corporation and Great Women In Music was held in Queens, NY and ran September 11-13. This stellar occasion was also an inaugural fundraiser that celebrated the Bartlett’s new foundation, which will benefit students, seniors, and veterans with a mission to ‘Enrichment Through the Power of Music.” …… The Greater New York Chapter of The Links, Incorporated helped usher in Domestic Violence Awareness Month with the annual Her Justice Story by Story Stair climb in midtown Manhattan. Each year dozens of women participate in the Stair Climb to raise in support of women and children affected by domestic violence. GNY has raised more than $28,000 since 2013. Among those participating were Chapter President Rhonda McLean and Links Charlita Caldwell, Joy Cole, Linda Zang–Haley, Donna Jones and Gail Monroe-Perry, Great job, Ladies………..