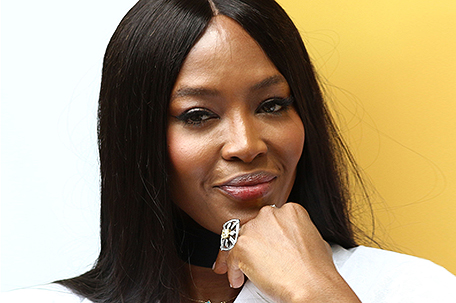 Samuel L. Jackson’s official 70th birthday is on December 21. However, on December 16, his wife, La Tanya Richardson, who is currently starring in “To Kill A Mockingbird” on Broadway, threw her hubby a birthday bash at Cipriani in New York City that was star-studded to the max. According to one party goer, the 500 A-listers on hand to help the brilliant actor celebrate the monumental age included Magic and Cookie Johnson, Clifton Davis, Holly Robinson and Rodney Peete, Spike Lee, Cedric the Entertainer, Whoopi Goldberg, LL Cool J and Sugar Ray Leonard. The evening was deejayed by Questlove, and Stevie Wonder sang his rendition of “Happy Birthday,” followed by “Superstition.” Star Wars mogul George Lucas gave Sam a birthday toast. The menu included everything from sushi to short ribs to “shrimp as big as Alaska,” and each guest was given $100 in play money to participant in a magnificent casino night……..

Naomi Campbell dropped in to see the off-broadway show, “A Soulful Christmas” on December 15 at Manhattan’s Actors’ Temple. In fact, according to reports, the supermodel and her friends Pat McGrath and Marc Jacobs were so moved by Anthony Wayne and Kendrell Bowman’s Soul Train-style Christmas special that the fashionable trio got up onstage……..

An Evening With Thelma Houston will be held on Thursday, January 17, 2019, at 7:30 PM at the Grammy Museum’s Clive Davis Theater in Los Angeles. On this magical occasion, Houston will also receive a replacement Grammy Award for her number one song, “Don’t Leave Me This Way.” Her original Grammy was broken in the Northridge, California earthquake in 1994. After 50 years of performing, 23 albums, and winning the Grammy for Best R&B Vocal Performance, Houston continues to celebrate her long and outstanding career………

On December 9, Urban One hosted the inaugural Urban One Honors Awards Show at The Anthem in Washington, D.C. The star-studded show, hosted by comedian and REACH Media personality D.L. Hughley, honored Jermaine Dupri, April Ryan, Brandy, Tom Joyner, DJ Khaled, Congresswoman Eleanor Holmes Norton and more. “I am immensely proud of our inaugural Urban One Honors Awards show,” expressed Urban One chairperson, Cathy Hughes. “We exhibited and experienced Black on Black love and appreciation, something that is extremely critical during these times……..