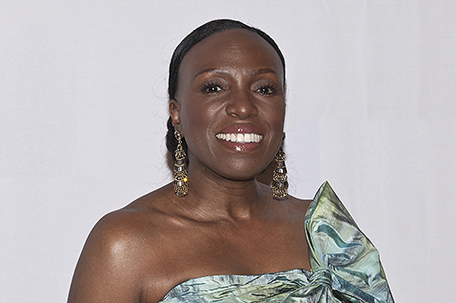 According to reports, the Adele love fest for Beyonce’ didn’t end when the Grammys went off the air.  The “Hello” singer was photographed holding the two pieces of the Grammy trophy after breaking it in two to give one half to Beyonce’. Meanwhile, Beyonce’s sister Solange, who picked up her own Grammy for Best R&B performance, hinted at a future Grammys boycott in a post on Twitter, saying that the telecast “suffers from cultural bias and general nerve damage.” Wrote Solange, “Adele is a great artist, but come on, Beyonce’ made a timeless masterpiece.” Congrats to Solange on her Grammy win!……..

On February 8 at the Taglyan Complex, Yours Truly was the guest of Nissan Diversity at the 8th Annual AAFCA (African American Film Critics Association) Awards kicked off Hollywood’s busy weekend which included the Grammys and NAACP Image Awards. Featuring a Salute to the Legacy of Sidney Poitier’s “Guess Who’s Coming To Dinner,” the evening honored the Who’s Who of the African American Film & TV community. Some of the hot moments of the night included Sanaa Lathan revealing that “back in the day all the women used to call “Moonlight” and “Hidden Figures” actor Mahershala Ali “Hershey Bar” as the actress,  along with Nissan Director of Diversity and Inclusion, Jeffrey Webster, announced Ali won Best Supporting Actor for “Moonlight” and  “Boyz n the Hood” director, John Singleton, presenting the Best Director award to newcomer, “Moonlight” director Barry Jenkins. Janelle Monae won Breakout Performance for her role in “Moonlight”. The eloquent Monae, who also stars in “Hidden Figures”, told the crowd, “Moonlight was my first film. I was so nervous.  It is no small thing to have the affirmation of your tribe.”………..

All new episodes of “For Peete’s Sake,”  the comedic yet highly intimate docu-series following the lives of actress Holly Robinson Peete, her husband and former NFL quarterback Rodney Peete and their family will return to OWN: Oprah Winfrey Network on Saturday, February 18 at 10 PM ET/PT. In a revealing new season, Holly and Rodney find themselves balancing it all amongst troubling headlines highlighting escalating police relations, and deep fears of raising sons Robinson, Roman and RJ in the current climate………..

The Harlem Fine Arts Show (HFAS) knows its diverse, eclectic and well-heeled patrons are always in search of the best of everything. HFAS runs February 16-19 at Riverside Church in Harlem. Premier Bay area jazz/classical vocalist, Denise Young, will perform during the opening reception on February 16. Beauty authority and influencer Mikki Taylor will host the third event in the “TalkingBEAUTY” brunch series on Saturday, February 18, from 11 AM to 3 PM. Lastly, Chicago’s Barbara Bates has dressed trendsetters for more than 30 years, including Oprah Winfrey, Charles Oakley and Michael Jordan. The fabulous designer will bring her latest collection, “Real Women Wear Barbara Bates,” to the Harlem Fine Arts Show on Saturday, February 18, at 6:45 pm………

Donors save Harlem School Of The Arts