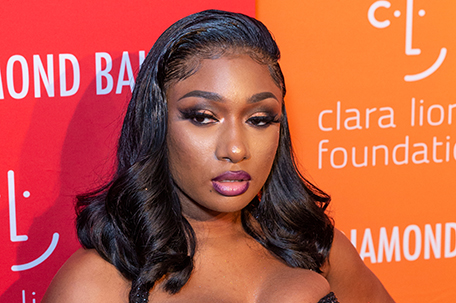 May 29, 2020 Category: Go With The-Flo Posted by: Philadelphia Sun Staff

Word on the curb is Meghan The Stallion has partnered with Rihanna’s Savage X Fenty line for its summer campaign. The popular raptress recently showed off  her new lingerie line on social media. The “Hot Girls Summer” femcee struck a super sensual pose wearing a bright yellow ensemble that highlighted her hourglass figure. Meanwhile, Meghan’s fans reportedly feel that she and Beyonce are shoo-ins for a Grammy nod in 2021 for the remix of her hit single “Savage” featuring Queen Bey…………

Towanda Braxton recently launched her own cosmetics line called Ladybug Skincare. The popular “Braxton Family Values” star has always had an interest in the beauty and skincare industry since she was a child, but after meeting the “Skin God” Charlotte Wilson of Slow Skin Enhancement, she took actions into her own hands. Ladybug Skincare features several products, including their Bar Day & Night Soap, Timeless Ageless Morning Toner, Timeless Ageless Day Moisturizer, Timeless Ageless Night Lotion, Anti Aging Serum, and Glow Sunscreen. “After you turn 40, your skin changes a bit and the products you used in your twenties don’t work anymore. Partnering with Charlotte Wilson was important to me because age is timeless, and I want to help women reflect that in their skin,” said Towanda. Ladybug Skincare can be purchased exclusively on ladybugskincare.com……….

TV One celebrates Black Music Month with the debut of its original documentary, “The Beat Don’t Stop,” airing on Sunday, June 21 at 8p.m. EDT, followed by an encore presentation at 10p.m ET. The long-awaited documentary was a year in the making and highlights the history and legacy of Go-Go music. The film also delves into the evolution of the Go-Go culture, celebrating the legacy of the Godfather of Go-Go music, Chuck Brown. “I always sought to represent the under represented. I always gave voice to the voiceless, and Go-Go was very much that,” said Cathy Hughes, chairwoman and founder, Urban One, who served as executive producer for the project……….

According to reports, rapper Quavo of the trio Migos can cross graduating from high school off his to-do list. “Finally can say I graduated High School Class of 2020,” he wrote on Instagram. Quavo posted photos of himself in his graduation best with a navy blue cap and gown, tassel and all. The emcee went to Berkman High School in Lilburn, Georgia, during his teenage years and was a starting quarterback for the school’s football team, according to the Gwinnett Daily Post. He dropped out in 2009. Congratulations!……….

With summer approaching, it’s time to reconsider your skincare regimen