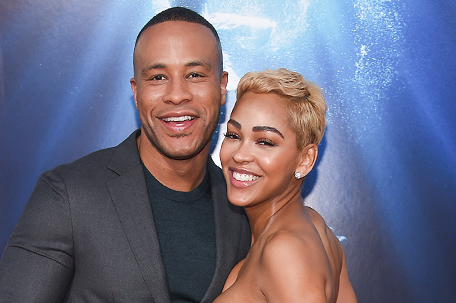 Kanye West’s estranged wife Kim Kardashian recently filed papers to be declared legally single from him, and on December 26, West looked very somber as he left Nobu Restaurant in Malibu, California, after having a late dinner with friends. Meanwhile, although Kardashian has moved on with “Saturday Night Live” comedian Pete Davidson, it looks like the rap mogul and clothing designer still wants to live in close proximity to the reality star and their four children. He purchased a $4.5 million house across the street from their home that Kardashian shelled out $23 million to him so she and their kids can remain there…….

I have actually known Meghan Good and DeVon Franklin have been separated for a while. After hearing rumors, it was obvious to me that there was some truth to the chatter, when Franklin did not accompany Good to the premiere of her new Prime Video TV show “Harlem.” On December 23, the former couple released a joint statement that after nine years of marriage, they are going their separate ways. “After much prayer and consideration, we have decided to go into our futures separately but forever connected,” the statement began. The exes, who met on the set of “Jumping The Broom,” which Franklin produced and Good co-starred in, went on to say, “We celebrate almost a decade of marriage together and a love that is eternal. There’s no one at fault, we believe this is the next best chapter in the evolution of our love. We are incredibly grateful for the life-changing years we’ve spent together as husband and wife.”…………

According to the Daily Mail, Lizzo treated her nearest and dearest to a couple of performances when she hosted a Christmas party on December 25. The “Truth Hurts” songstress arranged a karaoke set-up in her home theater where she sang her own renditions of several songs. Lizzo’s selections included “Lose Yourself,” the Oscar-winning tune that Eminem wrote for the 2002 film “8 Mile.” The lovely artist also belted out “The Christmas Song.” At the end of the evening, Lizzo, family and friends were all clad in matching candy cane red and white striped Christmas pajamas…….