Megan Thee Stallion and her boyfriend, Pardison Fontaine, made their red carpet debut at the iHeart Media Awards in Los Angeles 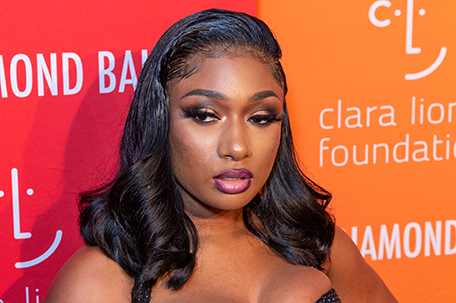 Actor Blair Underwood and his wife Desiree Da Costa are calling it quits after 27 years of marriage. The “Sex and The City” star and Desiree released a joint statement on May 30 to announce the end of their marriage and talk about how their union gave them three beautiful children– sons Paris and Blake and daughter, Brielle.  “After a tremendous amount of thought, prayer and work on ourselves individually, we have come to the conclusion to end our marriage that began 27 years ago,” the statement said. The estranged couple went on to say, “It has truly been a beautiful journey.” ………….

Serena Williams is one of the stars throughout the sports world that is reportedly standing behind Naomi Osaka. On May 31, Osaka, who is the reigning U.S. Open and Australian Open singles champion announced she was withdrawing from the French Open in an effort to preserve her mental health. In the wake of the announcement, Williams told reporters, “I feel for Naomi. Not everyone is the same. You just have to let her handle it the best way she thinks she can. That’s the only thing I can say. I think she is doing the best she can.”………..

According to reports, Megan Thee Stallion and her boyfriend, Pardison Fontaine, made their red carpet debut at the iHeart Media Awards in Los Angeles on May 27. Although this is the first time the pair walked a music industry event together, they were not shy when it came to packing on the PDA for the cameras. Megan first confirmed she was dating the “Backin’ It Up” rapper back in February on social media, posting, “I really like him. He is so perfect and he would never do anything to hurt me.”……….

Tony Dennis, co-founder of Tote & Carry, is affectionately known as The Stitch Doctor aka Stitch for his decades long career “stitching” custom quality fashion pieces for high profile clients. With a keen eye for edgy trends, the Buffalo native who resides in Atlanta stands by his favorite quote, “Travel with luxury” and assures that all of his creations are truly luxurious. Stitch has worked with stars and professional athletes including Shaquille O’Neal, Michael B. Jordan, Vivica A. Fox, Janet Jackson and Keyshia Cole……

Megan Thee Stallion and Tory Lanez are stopped by police around 4:30a.m responding to a call that shots were fired from the vehicle