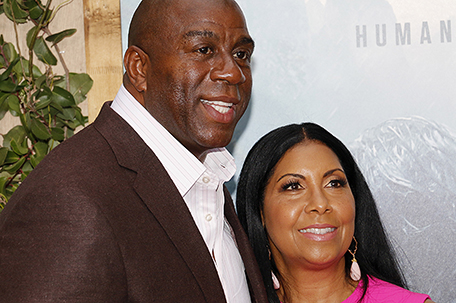 Welcome to the family. Just nine days after Nick Cannon welcomed newborn twin sons Zion Mixolydian and Zillion Heir with DJ and influencer Abby De La Rosa, the “Masked Singer” host welcomed his seventh child with Alyssa Scott on June 23. Scott took to social media to post photos of her son, Zen S. Cannon, with the caption, “I will love you for eternity 6-23-21,” confirming her little one’s arrival. ……….

There were a whole lot of fireworks going on for Earvin “Magic” Johnson and his wife Cookie on the 4th of July. The NBA superstar turned business mogul and his Mrs. took their very special married friends — who included Samuel L. Johnson and Latanya Richardson, LL Cool J and Simone Smith and Holly Robinson Peete and former Philadelphia Eagles quarterback Rodney Peete — on a cruise around the Mediterranean aboard the $150 million luxury yacht, Amadeus. Cookie was very excited when they dined at the Lemon Tree restaurant in Capri, where she and Magic were presented with a magnum of champagne with their faces on it. They also dined with Miami Heat owner Micky Carson and his wife, Madeleine.  A source told me that Magic is picking up the entire trip tab for everyone that is sailing with him. ………

The new Southampton African American Museum (SAAAM) in Southampton, NewYork, held a VIP reception and ribbon cutting to celebrate their historic opening. After 16 years of planning, the transformed barber shop to museum opened its doors for a community cultural experience highlighting the incredible journeys of Black people along uncharted paths from Virginia and the Carolinas north to Southampton. Prior to the event, philanthropist, donor and volunteer fundraiser for the museum, Jean Shafiroff, donated $10,000 and raised another $20,000. The funds Jean helped secure is more than a third of their budget of $85,000 to run the museum on an annual basis. During her speech at the grand opening, she encouraged people to open their wallets and their hearts to contribute to the fundraising efforts which they graciously did……..