MAC Cosmetics has announced a new collaboration with Teyana Taylor 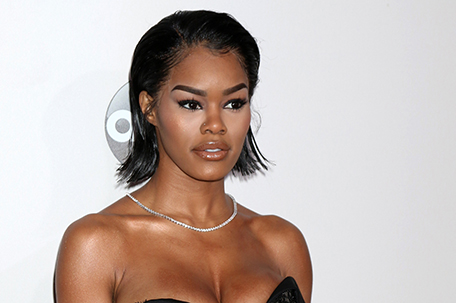 According to reports, the forever generous Tyler Perry will be paying for Rayshard Brooks’ funeral, who  was fatally shot by police in Atlanta on June 12. The entertainment mogul spoke to Brooks’ family about handling the arrangements financially, attorney L. Chris Stewart announced at a press conference on June 15. The death of the 27 year-old husband and father, which the Fulton County Medical Examiner’s office ruled a homicide, was the latest police killing of a Black man to fuel nationwide outrage against police brutality and racial injustice. Said attorney Stewart: “We do want to acknowledge and thank Tyler Perry, who we spoke with and who will be taking care of the funeral for the family. We want to thank him for such a generous move.”……

TV One follows the success of its popular film “Coins For Christmas” with the premiere of the sequel, “Coins For Love.: The film’s stars Essence Atkins, Stephen Bishop, TC Carson, Kendrick Cross and Karon Joseph Riley  return to continue this blossoming love story. It will air on Sunday, July 19 at 9 p.m./ET/8 p.m.CT, followed by an encore presentation at 11 p.m. ET/10CT. “I was happy to bring the Coins family back together for the audience,” shared Bishop. “If you enjoyed “Coins For Christmas,” I think you’ll really love this one.” The sequel reunites audiences with single mother Madison Morris (Atkins), who finds herself starting over…….

The Greater Harlem Chamber of Commerce (GHCC) presents a political Harlem PRIDE Summit on June 24 from 6-8 p.m. PRIDE leadership and tastemakers will boast panelists including co-chairs Irene Gandy, Donna Walker-Kuhne, Honorable W. Franc Perry, Emil Wilbeken, Emilio Esosa, Nona Hendryx and Mira Gandy, who will discuss fashion, arts, culture, film, education and civic engagement. The evening’s primary topics will evolve around how the LGBTQ community is advancing despite the pandemic and  about the community’s role and participation in the nationwide response to systematic racism and police brutality…….

It’s a very busy time for Teyana Taylor. MAC Cosmetics has announced a new collaboration with the multi-talented entertainer. The collection was inspired by the songstress’s love for the decade, and the heart and soul of Harlem, where she is from.  And for the real excitement in her life, Taylor and her husband, Brooklyn Nets player Iman Shumpert, are expecting a second baby girl. Teyana told People Magazine: “Iman is super excited. Junie is ecstatic- I’m talking super ecstatic. Everybody is just excited. I can’t wait. I’ve got three months left until we meet our little princess.”  Meanwhile, her fourth studio album, “The Album,” is also on its’ way soon…….