Lillias White was a tour de force in “The Devine One,” featuring-music from the legendary Sarah Vaughan songbook 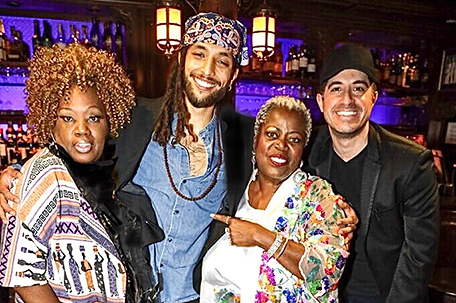 Dean of the Friars Club, Arthur Aidala, organized a tribute to comedian and Saturday Night Live alum Tracy Morgan at the Ziegfeld Ballroom. In the black-tie crowd were three mayors including, Rudy Giuliani, Bill de Blasio, and Eric Adams, who presented Morgan with the Icon Award — the Club’s top honor. Past recipients include Tom Cruise, Tony Bennett, Robert DeNiro, and Frank Sinatra. Adams asked Aidala, who is also an attorney and the host of “The Aidala Power Hour” on AM970, if he could arrange a photo of him and the other two mayors. However, de Blasio had already slipped out. When accepting the award, Morgan said, “Never give up. Fall down seven times, get up eight. Unless you get hit by a Walmart truck and then you can lay down and wait for your lawyer.” After Morgan’s speech, there were performances by Joe Piscopo, who sang a melody of Sinatra’s songs and CeeLo Green, who performed his biggest hits. Among those applauding were Ben Vereen, J.B. Smoove and three NY Knicks stars Obi Toppin, Allan Houston and Immanuel Quickley. Also in the room were Geraldo Rivera, Alan Dershowitz, Judge Jeanine Pirro, Eugenia and Janna Bullock and Tracy Morgan Jr. The event for 500 raised $500k with a portion of the proceeds going to the charity Stand Up to Cancer.. The evening was emceed by TV personality and actress Rolonda Watts.

“Love & Hip Hop” creator Mona Scott-Young has gotten a deal on BET + for former Empire star Jussie Smollett’s upcoming movie, “B-Boy Blues.” The Monami producer was spotted with the disgraced actor in the Big Apple last week. Scott told TMZ, “B-Boy Blues” is a beautiful, bold, funny, heartwarming bromance and I was thrilled to partner with Jussie to help this wonderful film gain greater exposure.” Smollett started work on the movie prior to the 2019 hate crime hoax allegation in Chicago and the pandemic. The film has already won several awards, including the Narrative Feature Award at the 2021 American Black Film Festival, and will be released as part of BET+’s Pride Month programming.

Demetrius Shipp, Jr, Paula Jai Parker, and Porscha Coleman join the all-star cast of “A Miracle Before Christmas” from writer and director LazRael Lison. LeToya Luckett, Romeo Miller and Keith David were previously announced to star in the feel-good love story about redemption. Luckett plays Mercedes Wright, a famous fast-talking relationship therapist who has all the answers to fixing everyone else’s marital issues but is challenged by problems faced with her husband (Miller). With help from an angel (David) Mercedes uses holiday season magic for “A Miracle Before Christmas.” Currently shooting in Los Angeles, the film is executive produced by Marlin D. Haynes with casting by Dea Vose.

Tongues are wagging that Lillias White was a tour de force in “The Devine One,” featuring-music from the legendary Sarah Vaughan songbook. The show was part of a three-night engagement from May 26-May 28 at New York City’s 54 Below supper club. The evenings were a joy to behold, as well as a collaboration between White and the jazz producing playwright Roz Nixon. The show featured White’s incredible trio, Buddy Williams on drums, Jonathan Michel on bass, and her brilliant musical director Mathis Picard on piano. In 2012, Roz penned a play called “SS Nirvana,” which featured five jazz masters, including Vaughan. Roz approached White a few years ago, feeling she would be perfect for the play. However, the chance to work with the Tony-award winning actress didn’t come to fruition until this May when White brought truth to power with songs like “Misty” and “Smile.” Song and verse were cleverly pulled together by director Will Nunziata. While performing “The Devine One,” White announced to the audience that the show was a preview of what will become a full book musical in partnership between herself and Nixon.