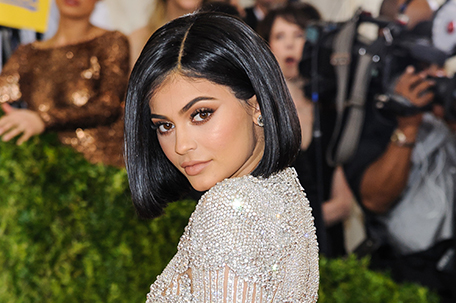 Another week. Another cast member of Keeping Up With The Kardashians has a baby girl with an African American rapper. Two weeks after her sister Kim Kardashian and Kanye West welcomed baby girl Chicago via surrogate mother La’Raina Haynes, Kylie Jenner revealed that she and boyfriend Travis Scott welcomed a baby girl on February 1- after months of keeping fans in the dark about her pregnancy. Says a source: “Keeping Kylie’s pregnancy under wraps for an entire nine months was ridiculously difficult for her friends. It was the hardest secret to keep.” Sources say she may have been secretly chronicling the pregnancy for her reality spin-off show “Life of Kylie.”……….

Jordan Peele’s “Get Out,” which is nominated for multiple Oscars and uses a horror movie plot to explore racial fears was recognized by the Directors Guild of America on February 3, which presented Peele with its award for outstanding first-time feature film directing. The awards for Peele and “Get Out” continued on February 7 when the African American Film Critics Association bestowed upon Get Out the award for Best Picture of 2017. “Get Out” also earned the awards for Best Directing, Screenplay and actor for Daniel Kaluuya. Yours Truly joined Nissan at the awards ceremony which took place at the Taglyan Complex in Hollywood……….

Comcast Xfinity has a new campaign to celebrate and kick off Black History Month. The “Groundbreakers: Heroes Behind The Mask campaign features a short film, print ad and commercial and radio spot, featuring creatives behind some of America’s beloved superheroes and animated series. The campaign will feature exclusive VOD packages with Phillip Boutte, Jr.; Cheo Hodari Coker and Dr. Sheena Howard, Academy Award nominee and powerhouse costume designer Ruth E. Carter (“Black Panther”) will be featured in the print campaign. “Groundbreakers: Heroes Behind The Mask” is available to all consumers online at xfinity.com/discovermore…….

According to Vogue.com, some Valentine’s Day gifts are fail-safes- who can resist the appeal of candy, perfume, or jewelry – and this year, fashionistas can add Beyonce’s merchandise to the list of luscious Hearts Fay presents for their loved ones. The superstar songstress is adding Valentine’s Day goodies to her capsule collections devoted to her favorite holidays, which included Christmas-themed sweaters back in December. The line of T-shirts and hoodies which are available on Beyonce.com include a King of Hearts long-sleeved shirt and other romantic theme Valentine’s Day offerings…….