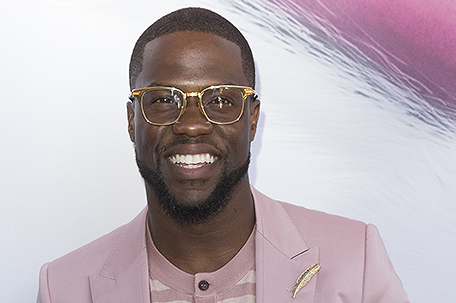 Tongues are wagging that Kevin Hart can now add “professional singer’’ to his resume. The comedian and actor recently made headlines after jumping on the stage during Usher’s concert at Caesar’s Palace in Las Vegas. Usher is currently in residence in “Sin City,” where at one point during his set, Hart jumped on stage and presented the audience with his own improvised performance. The comedic moment went viral, causing Hart to post on social media, “I’ve been on the phone all morning refusing offers and recording offers. I think I brought genuine R&B music back.”  Other celebs enjoying Usher’s performance the same weekend included retired NBA great Charles Oakley and his wife, Angela, who were celebrating their wedding anniversary…..

Although DaBaby has apologized three times for his homophobic rant last week, a day after the rapper was dropped from the Lollapalooza lineup in Chicago, the New York’s Governor’s Ball canceled his performance at the festival, which takes place in September. DaBaby was also dropped from a benefit concert for the Working Families party, which he was headlining alongside Saweetie and Wyclef Jean. Meanwhile, the emcee’s ex-girlfriend, singer Dani Leigh has confirmed that DaBaby is “Da Baby” daddy of the child she is carrying……….

Former President Barack Obama is reportedly being criticized for his plans to entertain almost 500 people at his Martha’s Vineyard mansion to celebrate his 60th birthday, even though there is a nationwide rise in COVID cases. The former POTUS hit the monumental number on August 4. An official familiar with the party plans told a source there are now 475 confirmed attendees for the soiree, including Oprah Winfrey, Gayle King, George Clooney and Steven Spielberg. According to reports, President Joe Biden is not expected to be at the festivities. Sources say all guests will have to be COVID tested and vaccinated. The party will be held outdoors on the Obama’s $12 million waterfront property……….[Editor’s Note: Obama’s office released a statement on Wednesday which read, “Due to the new spread of the delta variant over the past week, the President and Mrs. Obama have decided to significantly scale back the event to include only family and close friends.”]

TV One announced the final chapter to the “Coins” trilogy with production underway in Atlanta for its new original film “Coins Forever.” Actors returning to the “Coins” franchise include Essence Atkins, Stephen Bishop, TC Carson and Kendrick Cross, with newly added cast members Golden Brooks and Demetria McKinney. Coming this fall, “Coins Forever” follows after “Coins For Christmas” and “Coins For Love,” which revolves around the complicated relationship of Madison (Atkins) and Alec (Bishop)……..