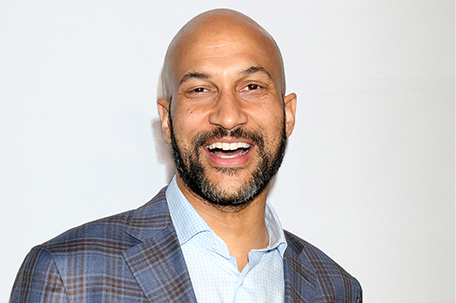 Writer and producer Keegan-Michael Key married Elisa Pugliese in New York City recently. The comedian and his bride exchanged vows in their home. This is the second marriage for the Key and Peele alum, according to reports. Keegan was married to Hollywood dialect coach Cynthia Blaise from 1988 until 2015. He recently told US Magazine: “So I’m getting married in nine days in my home. My fiancee’ is the most wonderful and passionate and sensible woman at the same time!” Congratulations!…………

Tongues are wagging that NFL Hall of Famer turned “Good Morning  America” host Michael Strahan, former NBA star Chris Bosh, and current captain of the Boston Bruin NHL team Zden Chara were all spotted at Noir Bar at The Charles Hotel in Cambridge, Massachussetts recently. The three athletes were celebrating finishing their Harvard Business School program, which is called: The Business of Entertainment, Media and Sports, as they toasted each other with cocktails……..

Golden Globe, Emmy and Screen Actors Guild nominee Kerry Washington returns to Broadway in the premiere of “American Son,” directed by Tony Award winner Kenny Leon. Costarring actor Steven Pasquale, American Son will begin performances on Saturday, October 6 with an official opening night set for Sunday, November 4. It will play a limited engagement at the Booth Theater in New York City. Kerry made her Broadway debut in David Mamet’s Race and starred for seven acclaimed seasons on the hit television ABC series “Scandal.” “American Son” is a gripping tale of two parents caught in our national divide with their worst fears hanging in the balance. Says Kerry: “This play dives deep into the big questions of who we are as a nation, by exploring the intimate relationships within a family caught at the crossroads of love, loss, identity and community.”……….

On International Jazz Appreciation Day, New York City’s Jazz at Lincoln Center announced the 2018 Ertegun Jazz Hall of Fame Class of inductees-  Jimmie Blanton, Nat “King” Cole, and Nina Simone. The legacy of each inductee, selected by public vote, will be celebrated during the three-night Ertegun Jazz Hall of Fame Festival, which will consist of curated sets on July 17-19, 2018 at Jazz at Lincoln Center’s Dizzy’s Club Coca-Cola. Highlights of the festival will include the Freddy Cole Quartet celebrating the incandescent voice of Freddy’s brother, Nat “King” Cole on July 19.