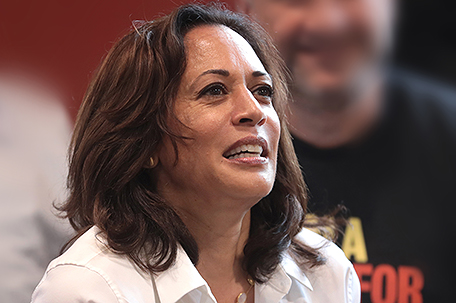 Get well wishes and prayers go out to veteran comedian Sinbad, who reportedly is recovering from a stroke. The Benton Harbor, Michigan native’s family issued a statement on November 16 that says: “It is out of sincere love that we share Sinbad, our beloved husband and father, is recovering from a stroke. Sinbad is a light source of love and joy for many generations. While he is beginning his road to recovery, we are faithful and optimistic that he will bring laughter into our hearts soon.”

Tongues are wagging that Vogue Magazine has been reaching out to Vice President-elect Kamala Harris’ team asking her to grace the cover of the prestigious publication, but she has consistently turned the opportunity down. A source told OK Magazine, “Vogue’s powerful editor-in-chief, Anna Wintour is shocked. She isn’t used to anyone passing on doing her cover.” An insider reportedly says that Madame Vice President-elect doesn’t feel being a fashion magazine cover girl is the right look for the new administration at the time….. .

On Saturday, November 21, music hit maker Al B. Sure will join the Bronx, New York based salon, Nails & Tips by Laila London, for their Thanksgiving turkey giveaway. The event will take place at the salon’s location -3740 Third Avenue, Bronx, New York 10456 – from 12 noon to 3 pm EST. “Folks in the neighborhood have been extra supportive of the salon,” said Alize Jones, owner of Nails & Tips by Laila London. “They’ve looked out for the business in so many ways. So, with the turkey giveaway, this is our way of giving back to the community.”……….