Jonathan Owens, the Houston Texans safety got down on one knee and proposed to Simone Biles Valentines Day 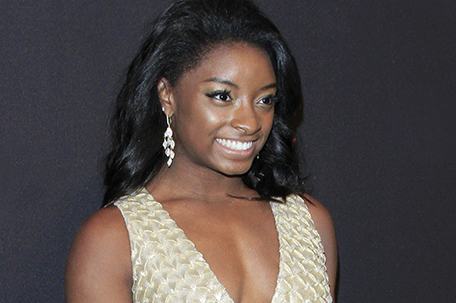 Big Apple businesswoman Eugenia Foxworth, known for her work as the president of the International Real Estate Federation for the USA, speaks with leaders in fashion, art, culture and society on her twice weekly podcast series, “The Foxworth Theory.” streamed live on its own network at: www.thefoxworththeory.com. The February 22 and 26 guests on “The Foxworth Theory” will be commercial design executive Denise Colestock -Tamez, and other future guests include Faulu Mtume (son of the late Grammy award winning artist, James Mtume), and philanthropist Simone Gordon – founder/CEO of the Black Fairy Godmother Foundation………

Congratulations to Simone Biles and Jonathan Owens. The Houston Texans safety got down on one knee and proposed to the Olympic multi-Gold medalist on February 14, Valentines Day. The engagement ring features an oval-cut diamond that’s set on a sparkly band. “The easiest yes,” Biles posted on Instagram. “I can’t wait to spend forever + ever with you. You’re everything I dreamed of and more! Let’s get married, Fiancé’.” According to reports, Biles and Owens first met on social media back in March 2020 and they immediately hit it off. “This was a match made in heaven. There’s no better person for me,” he told Texas Monthly. “She loves me, she’s so affectionate. I just love that. And it’s just intoxicating seeing how much work she puts into everything.”……….

African American designer Vavo Zadi saluted Black History Month during his New York Fashion Week show at Hudson Yards on February 12. The presentation featured model/actor Shaun Melady, whose next gig is tailor made for the handsome hunk, who has also been featured in multiple national Anheuser Busch beer ads. He will take on the key playboy role in the television show “The Grams” for Season 2……..