Jean Shafiroff donated all new toys for underserved children in the Village of Hempstead, New York 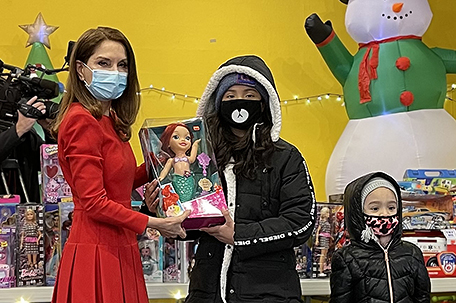 Quarantine Engagement Alert! Word on the curb according to the Blast, despite reportedly having all sorts of baby mama drama with the majority of the six mothers of his six children,  Future may be engaged to his new girlfriend, Dess Dior.  The couple was spotted together the weekend of December 19, at Lyfe Nightclub in Atlanta, and the up and coming raptress was rocking a diamond ring on her third finger, left hand. The coosome twosome were wearing matching baby blue varsity jackets with a ton of other diamonds dripping off them…..

In November, Michael Jackson’s eldest son showed his devotion to his Los Angeles community by giving out meals during the Thanksgiving holidays. On December 21, Prince Jackson once again displayed his generosity as he donated toys to underprivileged kids at Mattel in the El Segundo section of Los Angeles. Wearing a facemask with his alma mater Loyola Marymount University on it, the 23-year old film director/producer, along with his Heal L.A, Foundation, took 25 kids to the Mattel headquarters near Los Angeles International Airport and presented each of them with $150 to spend on themselves and their families, just in time for Christmas.  Prince assisted the children with selecting the toys, and hauled huge bags full of gifts out of the toy store for them, along with posing for pictures. He is just like his father!………..

Since we’re on the subject of holiday philanthropy, celebrity philanthropist/talk show host/author Jean Shafiroff donated all new toys for underserved children in the Village of Hempstead, New York. Approximately 100 children came by (two at a time and wearing masks to pick up their toys). She was joined by Hempstead Mayor Don Ryan and other officials. Said Mrs. Shafiroff, “ I was very happy to sponsor this event. To see the smiles on the children’s faces made my day! There are still remaining toys for children who could not get there.”…….

The Repertory Theatre of St. Louis recently debuted a new collection of stories that offer hope, encouragement and perspective in a time of global uncertainty in an exciting new work titled “Love and Kindness in the Time of Quarantine”. Directed and curated by the Andrew W. Mellon Foundation Playwright -in-Residence, Regina Taylor, the program will stream online until January 2021. Inspired by the community organizations that demonstrate love and kindness in the St. Louis region everyday, The Rep has partnered with the Urban League of Metropolitan St. Louis on this virtual production.