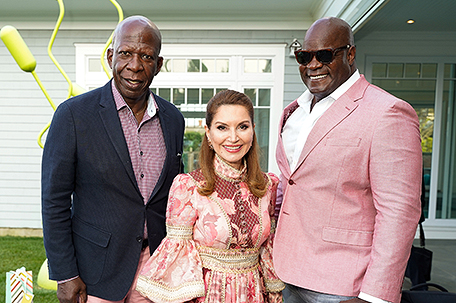 Although she stayed mum on the subject, two years ago I reported that Issa Rae was engaged, and now, the “Insecure” creator and star is a married woman. Rae married her fiance Louis Diame on July 25 in Saint-Jean-Cap-Ferrat in the South of France. The beautiful actress and producer looked stunning in a custom Vera Wang gown. Ironically, I ran into Wang on July 24 at a cocktail party in Southampton, New York. Rae’s groom was sharp in a red Dolce & Gabbana suit, while her gorgeous bridesmaids dressed in mauve colored gowns with spaghetti straps. Congratulations to the newlyweds!……..

OWN: Oprah Winfrey Network premiered a two-part “The Haves and the Have Nots” reunion special beginning on July 27. It will conclude on August 3 at 8 pm ET/PT. The beloved cast are coming together one final time in front of a live audience to relive all of the greatest moments, iconic scenes, and tumultuous relationships of OWN’s beloved number one drama series. The special features:Tika Sumpter (Candace Young), Angela Robinson (Veronica Harrington), Crystal Fox (Hanna Young), Renee Lawless (Kathryn Cryer), Tyler Lepley (Benny Young), Peter Parros (David Harrington), Gavin Houston (Jeffrey Harrington), and Aaron O’Connell (Wyatt Cryer). All of the greed and gluttony has gotten the best of the Cryers, Harringtons, and Youngs, and now after eight years and 196 episodes, “The Haves and the Have Nots” came to an end on July 20, where it was revealed who got the millions and who made it out alive…………

Journalist and publicist Rob Sauthoff released his self-published debut novel, “Headlines, Chase’s Journey Begins,” on July 13. Headlines follows Chase James, a young and ambitious entertainment journalist whose career is flourishing after taking a chance leaving his hometown in North Carolina. He moves to New York City in hopes of making it big in the music business. The book is available on Amazon, Barnes & Noble and www.therealninolopez.com……….

New York philanthropist, author and TV host Jean Shafiroff and her husband, vice chairman of the wealth management and investment banking firm Stifel, Martin Shafiroff, hosted over 100 guests at their beautiful Southampton home at the launch reception for the Stony Brook Southampton Hospital’s 63rd Summer Party, which will once again be a ‘host’ at home format. Among the many notable guests were New York State Assembly Member Rebecca A. Seawright, former TV producer and restaurateur Dan Gasby and Ron Myers. Jean serves on the board of the Southampton Hospital Foundation, as well as seven other charitable organizations……….

Jean Shafiroff donated all new toys for underserved children in the Village of Hempstead, New York

Lee Daniels’ “Star” may not be returning for another season, but the show isn’t totally done