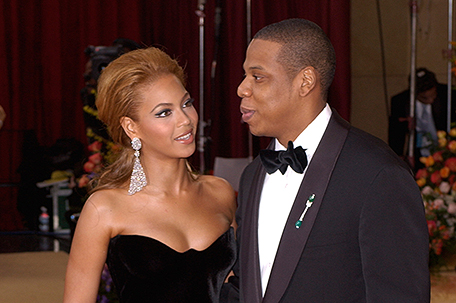 Jay Z and Beyonce headed to an exotic warm locale for Valentine’s Day. However, according to reports, Jay took the time to buy Bey’s Valentine’s Day gift before they jetted off to paradise. This year. the rap mogul went back to basics, selecting a simple, mixed-metal bracelet with a sentimental message to give to his wife. The Tacori new Promise bracelet cost $2,390. The bracelet’s silver and gold intertwined motif is designed to represent the couple uniting and it can only be unlocked with a special key……

The talk of Mercedes New York Fashion Week was Lil Kim showing up to the Blonds show on February 12 with a growing baby bump. Sources tell me she is about four and a half months along. The glowing raptress outfitted in a skin-tight dress with a bejeweled pattern running down the front announced on the mic that she is expecting. She told the crowd: “I’m a mom, but I can still turn it up a little. I’m still going to work. I’m still going to be hardcore. The baby has made me even more of a beast.” She then broke out into her song “Lighters Up” without revealing her baby daddy’s identity. However, a guy named Mr. Papers who she dated in 2012 tweeted out that he is the father. Meanwhile, Lil Kim has an upcoming reality show and a new album coming out during the third quarter of this year……..

Speaking of babies….NBA legend Michael Jordan and his wife Yvette Prieto, recently welcomed twin girls. Yvette gave birth to Victoria and Ysabel in West Palm Beach, Florida on February 9. His Airness also has three grown children, Marcus, Jeffrey and Jasmine by his ex-wife Juanita Vanoy. Michael is currently the owner of the NBA’s Charlotte Bobcats, who are in contention to make this year’s play-offs…….

Former VH1 “Basketball Wives LA” star Laura Govan was served with a federal lawsuit for airing a boxing match without a proper license. G&G Closed Circuit Events is suing Govan for broadcasting a fight at her Oakland Sports Bar, Kimball’s Carnival, without paying a licensing fee. Such an act is in violation of federal laws. G&G is seeking $170,000 plus attorneys fees……

Recently, Lifestyle Men’s publication, Bleu Magazine, partnered with Hennessy, Flitty Fitty, Nivea Men and Tesla to celebrate Nick Cannon gracing the cover of its upcoming issue. The event took place in New York City’s Meatpacking district at the trendy chop house STK. Guests, including Nick, were escorted to the upper level to the cocktail hour and seated dinner for 30. The Nick Cannon issue of Bleu comes out February 25…….