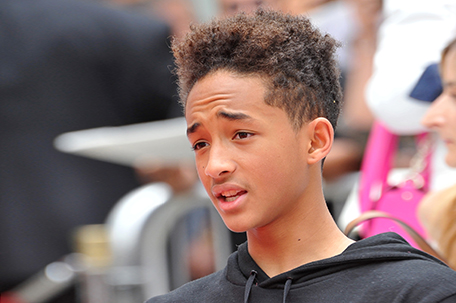 Taking his flamboyant sense of fashion to a new limit and swathed in women’s clothing in the ads, Jaden Smith is the new face of Louis Vuitton. The son of Will and Jada Pinkett-Smith, Jaden, who wore a dress to his prom and regularly sports an all-white Batman costume, has been very open about his fashion choices. He was named one of “GQ’s 20 Most Stylish Men Alive” in 2015. His style icons are Batman, Robin and Kanye West………..

Speaking of the Smith family, Dr. Bennett Omalu, the real-life subject of the movie Concussion praised Will as he presented the actor with “Variety” Magazine’s Creative Impact Award on January 3 at a brunch at the Palm Springs Film Festival………

Patti LaBelle’s baked goods empire at Wal-Mart is expanding. The legendary entertainer’s Patti’s Good Life culinary brand is debuting two new desserts to add to her highly successful Sweet Potato Pies. The first of the new baked goods is a vanilla pound cake which debuted January 4. The classic dessert is said to be “dense and buttery” with a “generous” helping of vanilla icing. On January 18, Wal-Mart  will introduce the second of the new desserts, a caramel cake which is “three layers of yellow cake filled with caramel buttercream and topped with caramel icing……

Executive Producer v was on hand to celebrate the new unscripted series “The Rap Game” with over 200 local Atlanta VIPs, including Da Brat, Bryan Michael Co, D. Woods and many more at Suite Food Lounge in Atlanta. Atlanta-based “The Rap Game” cast member Miss Mulatto along with her parents Shayne and Misti Pitts were also in attendance to enjoy the festivities. “The Rap Game” – airing Fridays at 10/9c on Lifetime – will give five emerging young hip hop artists, ages 12 to 16, the opportunity to rhyme and flow with JD as he searches for the next big name in hip hop……..

Former “Cosby” star Keisha Knight Pulliam is engaged to former NFL player Ed Hartwell, who was on the first season of “The Real Housewives of Atlanta” when he was married to Lisa Wu, who is now on TV One’s “Hollywood Divas.” Keisha was last seen on “Celebrity Apprentice” in which she was eliminated from during the first episode. Hartwell and Lisa divorced in 2012……..

Men In Black 3 would be next for Will Smith