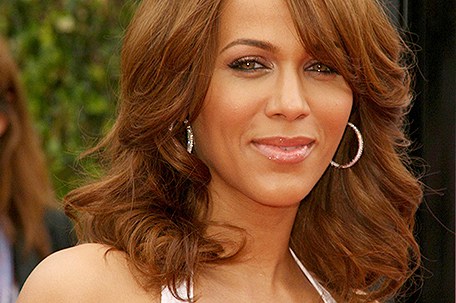 Iman, Nicole Ari Parker, Rosario Dawson and Aurora James were among the bevy of beauties that attended the inaugural benefit gala for Fifteen Percent Pledge on April 2 at the New York Public Library. The evening was a celebration of the organization’s progress since its founding in June 2020 in order to boost Black fashion brands by holding retailers accountable as they commit 15% of their shelf space to Black-owned labels. The group’s founder, Aurora James, told Footwear News, “We’ve spent so much emotional capital over the past two years having these tough conversations every single day, and partnering with major corporations and also working to hold them accountable that it’s nice to come together and celebrate the accomplishments and experience a sense of joy.”

“And Just Like That” actress Cynthia Nixon and her family were spotted in the audience of “Take Me Out” at the Hayes Theatre on April 3 in New York City. Written by Richard Greenberg and directed by Scott Ellis, Go With The Flo gives “Take Me Out” a five-star rating and feels it is the hottest play on Broadway. Boasting a star-studded cast that includes former “Grey’s Anatomy” actor Jesse Williams as Darren Lemming, the star center fielder for the Empires, who comes out of the closet, causing clubhouse and off the field prejudices and hostile reactions. A must-see! Speaking of Broadway shows, Marlon, Tito and Jackie Jackson of the Jackson 5, flew in and out of New York on March 29 to see “MJ:The Musical” at the Neil Simon Theatre. Says a source: “They loved it!”.

On Saturday, April 2, 2022, Ashanti celebrated the 20th anniversary of her self-titled multiplatinum debut album by announcing the launch of her first NFTs on the EQ Exchange platform. “I’m so grateful that y’all been rocking with me for over 20 years!” Ashanti stated in a post on her official Instagram account. “Now I finally get to give you something in return. I’m beyond excited to announce that my NFT collection will be available Wednesday, April 6 and I want y’all to have ownership in these new masters!” Ashanti is currently in the process of re-recording classic tracks from her landmark album in order to take full control of the rights to the songs she wrote.

Not being able to play in a regular basketball game yet to his back injury hasn’t stopped new Brooklyn Nets player Ben Simmons from exploring the Big Apple. The former Philadelphia 76er has been spotted out and about several times accompanied by his fiancée, Maya James. The couple was most recently seen having dinner with his crew at a re-established eatery enjoying their offerings several times last month.

Rosario Dawson relishes being the lead on new TV drama