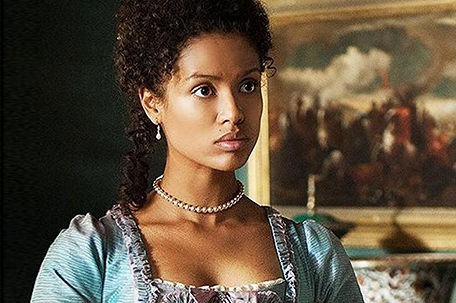 ABOVE PHOTO: Gugu Mbatha-Raw in a sill from Belle.

“Sony made a mistake in pulling ‘The Interview.” Those were President Barack Obama’s words on December 19 after the FBI announced that North Korea was responsible for the cyber attack on Sony Pictures Entertainment. “Yes, I think they made a mistake,” he said at a press conference. We can not have a society in which some dictator some place can start imposing censorship in the United States.” Sources say Sony stands to lose $200 million by canceling the film……..

Since we’re chatting about the cyber attack on Sony, after President Obama, Kevin Hart and Angelina Jolie came under fire from racist Sony executives, Radaronline.com has learned that Denzel Washington is the latest target to be revealed in the explosive hacker email leak. According to emails from the execs, two-time Oscar winner Washington should not be cast in films that will get play overseas- because he is black. Washington’s “The Equalizer” grossed $191 million at theaters worldwide, with 47 percent of the ticket sales coming from outside of the United States. Still, the email chain suggested that the overseas box office percentage was not good enough. Other films should expect 65 percent of the sales abroad, the analysis said. The reason for the disperity? According to the producer, it was Denzel’s race……….

The winners have been announced for the 6th AAFCA Awards in Los Angeles. Guga Mbatha-Raw has been awarded the Best Actress Award by the members of the African American Film Critics Association for her performance in Belle. Selma, the first studio film to center around Dr. Martin Luther King, Jr., is the big winner among the critics representing the AAFCA. The Paramount film earned multiple awards from AAFCA for Best Director (Ava Duvernay), Best-Actor for David Oyelowo and Best Song for the John Legend/Common theme song, “Glory.” ……….

The Beyond the Boroughs National Scholarship Fund, a charity organization focused on providing college scholarships to deserving students who have unmet financial needs, announced their partnership with worldwide tennis megastar Serena Williams and her charitable organization, The Serena Williams Fund. Serena has selected Beyond The Borough s to administer her college scholarship program. The reigning number one women’s tennis player excitedly announced this partnership at the home of Marc Leder, Co-Chief Executive Director of Sun Capital Partners on December 12, standing side by side with Beyond the Boroughs Founder, NFL veteran Tutan Reyes. All Serena Williams scholars will also be eligible for internships through Beyond the Boroughs. Students can apply online at www.beyondtheboroughs.org free of charge between January 15, 2015 and March 15, 2015………..

Stevie Wonder has welcomed his ninth child, and second child with girlfriend Tomeeka Robyn Bracy, a baby girl named Nia. Wonder, 64, is a proud father to eight other kids from previous relationships. It was first reported that Tomeeka was expecting triplets, but Stevie shot that rumor right down. Wonders rep says the baby’s name means purpose, which is “one of the seven principles of Kwanzaa.”…….