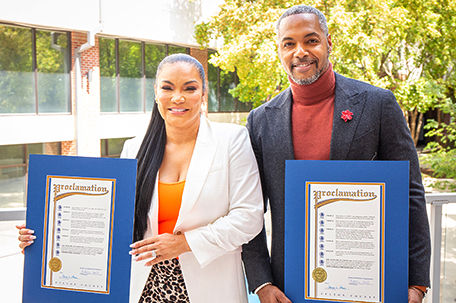 Fulton County Commissioner Natalie Hall presented two proclamations to HGTV’s stars Egypt Sherrod and her husband Mike Jackson in honor of their philanthropic and career achievements. The outdoor ceremony was held in West Midtown Atlanta at the all-new Black-owned IWI Fresh Farm Spa.  On August 23, Fulton County, the largest county in Georgia, was officially named after the co-hosts of HGTV’s “Married To Real Estate.” The couple had two of their three daughters, 20 year-old Kendall and three-year-old Harper, with them to witness their parents’ recognition for years of hard work.

Be A Light, in collaboration with Motown Gospel, announced the September 2 release of “The Evening: Live at Apparatus,” a new live album from four-time Grammy-nominated duo, The Baylor Project.

This soul-stirring set was recorded in front of a live audience at Apparatus – an interdisciplinary design studio in New York City. For three nights, the couple and their band graced the stage at MUMS, a jazz club created within Apparatus’ gallery. The Baylor Project’s outstanding live performances have brought audiences to their feet worldwide.

According to People, Meghan Markle’s podcast is up and running. The first full episode of “Archetypes,” hosted by the Duchess of Sussex, was released on August 23. Back in 2020, Markle and Prince Harry announced a “multi-year partnership” between their production company Archewell Audio and Spotify. Markle’s first guest was her dear friend, tennis champion Serena Williams. The ladies’ conversation revolved around ambition — and how it is a “dirty, dirty word when it comes to women.” Before the ladies got started with their talk, Prince Harry crashed the interview to say hello to Williams. Mariah Carey will be Markle’s next guest.

The Rainbow Prince premiered on August 20 at the historic Cinema Village in New York City, with matinee showings beginning August 19 through August 25. “When you see yourself in the world, it’s hard to feel a part of it,” says Clare-Hope Ashitey, lead actress Marea in The Rainbow Prince, a short film that flips the script on the old fashioned fairytale: the princess is Brown, and she saves the prince. The prince, named Rainbow, (newcomer Dwayne Moore) has skin that changes colors to reflect his feelings. Brown is his happy color.