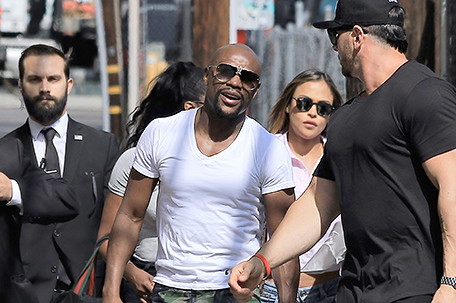 Floyd “Money” Mayweather Jr helped the family of George Floyd by paying for their murdered loved one’s multiple funerals. The undefeated boxing champion financed all four of the services that took place on June 4 to celebrate Floyd’s life. Rev. Al Sharpton delivered the eulogy at the family memorial service at North Central University in Minneapolis, which included a national statement from attorney Benjamin Crump and the participation of family members from across the nation. Other services will take place in Floyd’s hometown of Houston, Charlotte, and another location to be named at a later date…….

“Shazam” host Jamie Foxx traveled to Minneapolis on May 30 to support demonstrators protesting Floyd’s murder at the knee of police officer Derek Chauvin. The Oscar winning actor told the crowd: “All I wanted to do is let you know we are not afraid to stand. We are not afraid of the moment.” According to reports, the Houston, Texas native was joined by his homeboy, retired NBA player Stephen Jackson, who grew up in Texas with Floyd and affectionately called him “Twin.”……..

According to reports, Jay-Z praised Minnesota Gov. Tim Walz for appointing African American Minnesota Attorney General Keith Ellison to lead the prosecution of any cases arising from the murder of George Floyd. Ellison increased the charges against Chauvin from third degree murder to second degree murder on Wednesday. The other three officers involved — Thomas Lane, J. Keung and Tou Thao — were charged with aiding and abetting a murder. Meanwhile, Gov. Walz confirmed that he received a call from Jay-Z asking him to prosecute all four officers involved. Said Walz: “It was so incredibly human…it was a dad.”………

Many celebrities stood up for social injustice and joined protests of George Floyd’s murder. Stars spotted  protesting in Los Angeles included Nick Cannon, Paris Jackson, Tyler The Creator, and “Insecure” star Kendrick Sampson, who filmed himself getting hit by a baton wielding cop. Sampson was reportedly also shot with rubber bullets. In Atlanta, “Real Housewives of Atlanta” star Porsha Williams was spotted protesting with her sister Lauren Williams, and friend Shamea Morton. The ladies donned masks and held signs while rallying for justice in the streets…….

Floyd “Money” Mayweather, Jr. and his caravan of three UV took on gun shots in Atlanta