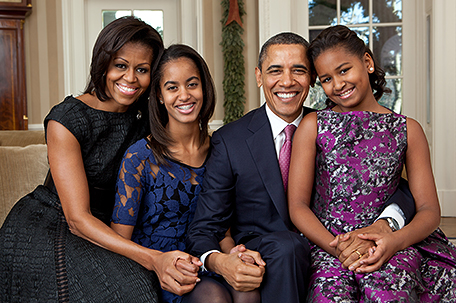 TMZ is reporting that Ray Rice has returned to the club scene for the first time since video surfaced of him beating his wife Janay in an Atlantic City elevator. The newly reinstated NFL player was spotted at Bonce Sporting Club on Manhattan’s Upper East Side late November 29, where he posed for photos with fans and chatted with everyone in sight that approached him. Sources say that security was trying to keep fans away from Ray, but he talked to everybody in sight. Some club goers say his wife Janay was with him, and also spilled the beans that Ray was not drinking alcohol. Meanwhile, in an interview with the “Today” show, Janay told Matt Lauer that the support system she thought the Baltimore Ravens provided them was not there in the couple’s time of need. She also told Matt that Ray never hit her prior to the elevator incident and hasn’t laid a hand on her since then……..

The First Family reportedly took part in Small Business Saturday by heading out to Washington D,C, bookstore Politics & Prose. As President Barack Obama, accompanied by daughters Malia and Sasha, checked out, he noticed a book about him. The President spotted the new book, “The Stranger: Barack Obama in The White House,” by Chuck Todd, host of NBC’s “Meet The Press.” The president noted that he looked lonely on the cover. and Malia asked, “How is he already writing a book?” With a smile, Malia added that her father looked sad on the cover. ‘Looks like a sad book,” she said teasingly, in a typical family exchange not often seen from the Obamas in public……..

Idris Elba is taking an adventurous career detour to top line a doc-series about racing for Discovery Communications. The actor known for his on-screen intensity in the BBC drama “Luther” and HBO’s “The Wire” will immerse himself in racing on land, sea and in the air for a series designed to shed light on the mechanics of speed. The four-episode skein is slated to air in mid-2015 on Discovery. The series’ working title is “The Idris Elba Project.” Elba said the series will depict his training with top engineer and racing experts as he prepares for various racing challenges………  .

Having had an epiphany while incarcerated, Roy Albert Andrade, a former gangster and ex-con has written a novel “Cultivating the DNA of Crime.” The book is technically a fiction novel but the gritty action/adventure is deeply rooted in the real world of gangs and gang crime. Andrade has released the book, his first novel through Killer Inc, a book publishing company that he has formed. While incarcerated, but never convicted of any crime, Andrade chose to use his time in prison to talk with inmates about circumstances that led to crimes they had committed. The talks developed into his passion for life and a passion for writing. …………

Youth Minister Lamar M. Whitehead, Founder of Leaders of Tomorrow Brooklyn, will be presenting at the Greater Allen A.M.E. Cathedral in Jamaica, New York, December 12 from 7 pm to 11 pm. Scheduled performers included Grammy Award winning gospel artists Yolanda Adams, Erica Campbell and the Greater Allen Cathedral Choir. The extravaganza will be hosted by the acclaimed Liz Black of 107.5 WBLS-FM radio. For more information visit www.leadersoftomorrowbrooklyn.org. Whitehead’s mission to help save the youth and the community at large was inspired by personal real life incidents including the NYPD beating and chokehold death of his father, community activist and entrepreneur Arthur Miller, which inspired Spike Lee’s Radio Raheem character in his classic film “Do The Right Thing.”……….