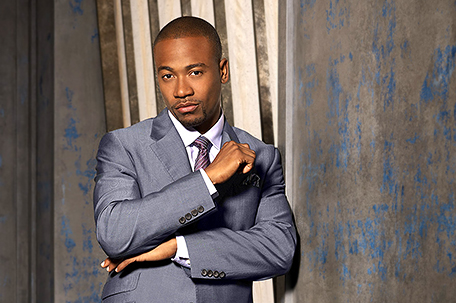 Chris Brown’s off/on girlfriend Karrueche Tran was among the chicsters that attended ELR project, a one-of-a-kind pop up photography gallery showcasing the 2014 Cadillac ELR Extended Range Luxury Coupe on West 34th Street in the Big Apple on April 16. Bravo’s “Blood, Sweat and Heels” star Geneva C. Thomas was also in the house, as well as GM Communications Executive Jocelyn K. Allen, who hosted the exclusive evening. New York City’s landmarks and hotspots served as the background for four of the city’s most renowned photographers as they captured ELR through their own lens…….

Idris Elba took to twitter to reveal the birth of his new son with girlfriend Naiyana Garth. “My son Winston Elba was born yesterday……truly amazing,” he tweeted, along with a photo of the newborn clutching his finger. Baby Winston is the second child for the British actor. He is also dad to daughter, Isan, 11, with his ex-wife, Dormanawa Sherman, who will be on the Atlanta spin-off of “Hollywood Exes”……..

President Barack Obama and First Lady Michelle Obama enjoyed a date night recently at the theatre. Potus and Flotus checked out Denzel Washington in the Broadway revival of :”A Raisin In The Sun” at the Ethel Barrymore Theatre in New York. They were joined by administrative adviser Valerie Jarrett and NFL star turned TV Sports Broadcaster Ahmad Rashad, who have been dating since Rashad and his third wife, socialite Sale Johnson, divorced last year. Ahmad was also married to award winning actress Phylicia Rashad. They have one daughter together, Tony award nominated Condola Rashad………

The man of the hour, Pharrell, is selling his duplex penthouse in Florida, which sits atop a condo skyscraper for $11 million dollars. The posh crib has a 300 degree view of Miami and South Beach. The terrace overlooks the Biscayne Bay and the rooftop pool terrace includes a kitchen and an entertainment area. “Living your life 40 floors up, you see the world from a different point of view,” the “Happy” crooner says about the 9,080 square foot apartment. Meanwhile, along with the Billiards room, there’s a separate screening room……..

Following Columbus Short’s wife, Tuere Short, filing for divorce, as well as a new restraining order against him, the “Scandal” star issued this statement: “As you all know, lately, my personal life has been objected to a lot of press. I must refrain from making any comments even though that’s very difficult for me under the circumstances. Thank you to my fans for your continued support during this difficult time.” Tuere accused Columbus of allegedly attacking her with a wine bottle and threatening her with a knife on April 7. She says he threatened to kill her and himself. He was ordered to move out of their house on April 16, which he did. She filed for divorce on April 15 and is seeking sole custody of the couple’s two year-old daughter……..