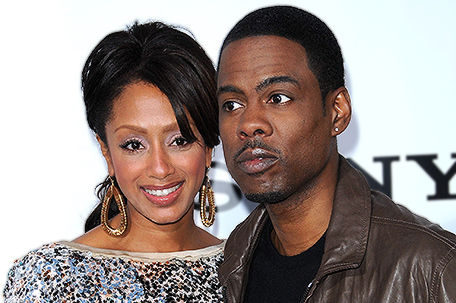 According to numerous reports, Chris Rock is divorcing his wife of 19 years, Malaak Compton-Rock. The Top Five director and star has hired high-profile divorce attorney Robert Cohen, who issued a statement, “Chris Rock has filed for divorce from his wife, Malaak. This is a personal matter, and Chris requests privacy as he and Malaak work through this process and focus on their family. The estranged couple are the parents of two daughters, Lola Simone, 12 and Zahra Savannah, 10. Malaak also released a statement, confirming the break-up, “After 19 years of marriage, Chris and I have decided to go our separate ways.” …………

Congratulations goes out to Alicia Keys and Swizz Beatz. The couple welcomed their second child, a son named Genesis Ali on December 27. Alicia posted on instagram: “The joy of joy is joy! It’s a boy! We are so grateful!!” The songstress, who married Swizz in 2010, also posted a photo of two tiny baby footprints over a purple star. She wrote: “Date: 12/272014. Time: 1:52 am, Weight 6 pounds, 5 ounces.” The couple are already parents to 4 year-old son, Egypt Daoud……….

Jodeci has returned after an 18 year hiatus. The super group best known for hits such as “Come and Talk to Me,” “Forever My Lady,” and “Feelin,” gave fans a sneak peek at their newest record “Nobody Wins” with a performance at the Soul Train Awards in November. Jodeci performed a snippet of the record as part of a medley performance of the group’s most popular hit songs. Now, Jodeci has followed that up with a lyric video for “Nobody Wins,” with an anti-domestic violence message. Says K-Ci, “We aren’t immune to issues that are important in our community. Domestic violence has always been a issue in relationships, but lately it’s been brought to the front of our community consciousness.” Jodeci is scheduling the release of their new album in the first quarter of 2015, which will officially celebrate the powerhouse group’s triumphant return to music………..

Tongues are wagging that Ludacris proposed to his girlfriend Eudoxie the day after Christmas by projecting the question on the ground and showing it to her from a plane. The happy couple has been dating since at least 2009 when the two took a vacation to France together………

Kevin Hart flashed a smile while making his way out of DBA Nightclub recently in West Hollywood. The popular comedian was accompanied by his fiancee Niko Parrish and friend Nick Cannon as they enjoyed a night out on the town. The official trailer for Kevin’s upcoming film with Will Ferrell, “Get Hard,” has just been released. Meanwhile, Kevin and Eniko were caught on the Kiss cam at the Los Angeles Lakers game the following night. ……..