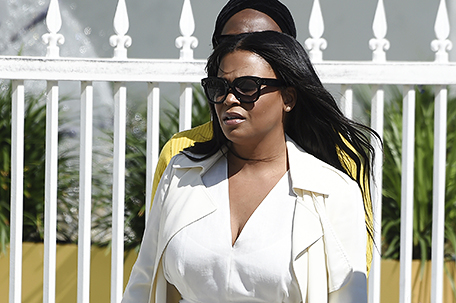 May 10, 2019 Category: Go With The-Flo Posted by: Philadelphia Sun Staff

“We are pleased to announce that their Royal Highnesses The Duke and Duchess of Sussex welcomed their first born child in the early morning of May 6, 2019. The Royal Highnesses’ son weighs 7 pounds, 3 ounces. The Duchess and baby are both healthy and well. And, the couple thank members of the public for their shared excitement and support during this very special time in their lives,” said a statement from Kensington Palace. Prince Harry then surprised the media by venturing outside of their home and speaking to everyone. Aside from telling the press he doesn’t know how women go through that, he said his new son doesn’t have a name yet and he and Meghan are still thinking about it. Little Baby Sussex is born to a biracial American woman whose mother raised her all alone as a single Black woman. He is the first mixed baby in many generations to be born a Windsor and the first English/American baby. The little bundle of joy is seventh in line to be the King of England! [As of this printing, the baby was named Archie Harrison Mountbatten-Winsor. -Ed.]

Although the world saw them on the Pink Carpet at the Met Ball on May 6, newlyweds Idris Elba and Sabrina Dhowre made their first public appearance as a married couple at designer Ozwald Boateng’s Fashion Show at the Apollo Theater in Harlem on May 5. According to reports, Boateng partnered with the Harlem 100 Committee as an ode to the 100th anniversary of the Harlem Renaissance. The 60 models included rapper Diggy Simmons and actor Michael K. Williams. Aside from Idris, (who wore a Boateng designed tuxedo to his wedding) and Sabrina, celebs at the event also included Dapper Dan, Jamie Foxx and Jesse Williams.

The Bobby DeBarge Story will air on TV One, Saturday, June 29 at 8 PMET/7C, followed by an encore presentation at 10 PM ET/9C. Debuting during Black Music Month, the biopic tells the story of Bobby DeBarge, the eldest sibling of the world famous pop group, who despite his success in music, struggled with fame and found his life in peril.

The film, which stars Roshan Fegan in the lead role, explores the highs and lows of the singer’s life in the limelight, including his rise to stardom, coping with memories of his dysfunctional childhood, romantic relationships, struggles with substance abuse, incarceration and failing health. Bobby DeBarge died August 16, 1995 of complications from AIDS.