Carmelo Anthony has reportedly separated from his wife, La La 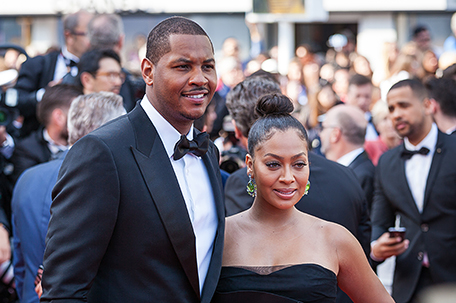 Tongues are wagging that Carmelo Anthony has reportedly  separated from his wife, La La after seven years of marriage. According to the New York Daily News, the celebrity couple is currently living apart, and La La has moved out of their home into her New York City apartment.  Sources say the separation was amicable. The New York Knicks superstar and reality star/author’s public romance began in 2004, and their wedding six years later was documented on the VH1 reality show “La La’s Full Court Wedding.” The show was so successful that the couple got a new show, “La La’s Full Court Life,” which ran for five seasons. La La’s bestselling book was recently optioned by Lifetime for a TV series. The couple has a 10-year-old son, Kiyan………….

The Apollo Theatre and Fox announced Showtime At The Apollo has been picked up as a one-hour weekly series featuring Steve Harvey as host. Set to debut during the 2017-2018 season, Showtime At The Apollo is a reimagining  of the classic talent showcase series. “We all had such a blast on the two specials  that aired earlier this season, that we thought it really deserved being a weekly event,” said Harvey. Open auditions for Showtime At The Apollo will be held at the legendary theatre in Harlem on Sunday, April 23. This audition is open to singers, dancers, comedians, and musicians of all ages and musical styles………….

Biracial actress Meghan Markle is set to attend Katherine, the Duchess of Cambridge’s sister Pippa Middleton’s wedding to financier James Matthews as Prince Harry’s date. Reports say while the “Suits” actress will not be on hand for the ceremony at St. Mark’s Church in Engelfield, England on May 20, she will be by Harry’s side when they attend the evening party after the nuptials. The source explained that protocol prohibits unmarried and un-engaged partners to attend the event, but they are more likely to attend the big bash afterwards. Meanwhile, the Prince spent Easter in London with Meghan and her African-American mother and Caucasian father………..

Terrence Howard and wife Miranda are expecting their first child together