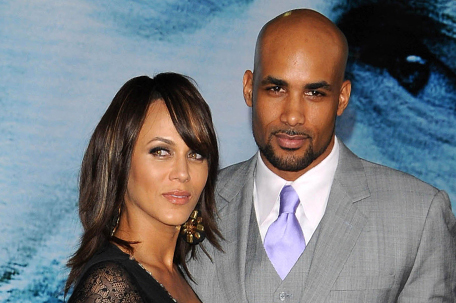 May 22, 2020 Category: Go With The-Flo Posted by: Philadelphia Sun Staff

May 14 was the season finale of “Station 19.” Actor Boris Kodjoe, who portrays Captain Robert Sullivan on the ABC drama about first responders, says he and his wife, actress Nicole Ari Parker, have given away over 100,000 face masks as a way to support “our heroes” — all the first responders during this pandemic. Said Kodjoe: “It was actually Nicole’s idea. So we are providing soft reusable masks that come in gray, blue, black and pink for the ladies.” As for his show, Station 19, Kodjoe says he and his fellow castmates are waiting to see when they can get back to start filming next season. “It depends on when this country gets itself together and tests everybody for Coronavirus, not just those who can afford it.”…….

According to reports, Taraji P. Henson will be the commencement speaker for a virtual graduation honoring students in her hometown of Prince George’s County, Maryland, on Saturday, May 30. Other special guests will include Kenny Lattimore and NFL player Joe Haden. The Oscar nominated actress will address more than 8,000 seniors who are graduating from the county’s public, charter and alternative high schools……..

Grammy-nominated, multi-Platinum recording artist Post Malone, recently announced his latest creation, Maison No. 9, a new French rose’ created and developed in partnership with James Morrissey of Global Brand Equities, and Dre London, longtime manager and Founder of London Entertainment. A thoughtful collaboration designed to break down the traditional collaboration designed to break down the traditional perceptions around wine and its barriers for consumers, Maison No. 9 is a light, high-quality rose’ from Provence, France……