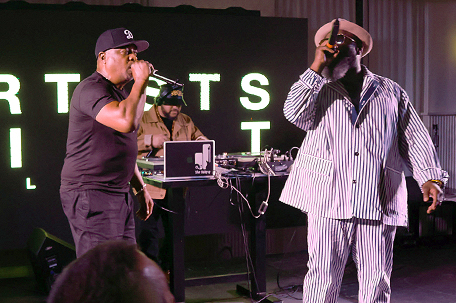 According to TV Newser, “CBS This Morning” co-host Gayle King is being honored with Arizona State University’s Walter Cronkite Award for Excellence in Journalism. Since 1984, the award, named after the late legendary CBS News anchor, has recognized the accomplishments and leadership of prominent journalists throughout their careers. Said King, “I am honored to accept the Walter Cronkite Award for Excellence in Journalism.” Oprah Winfrey’s BFF will be honored during a ceremony in Phoenix on February 21, 2023, at the Sheraton Phoenix Downtown.

The Artists First Alliance, consisting of Baxter St at CCNY, led by Michi Jigarjian and Jil Weinstock, NXTHVN, founded by Titus Kaphar and Jason Price, and The Last Resort Artist Retreat fund by Derrick Adams gave a collaborative benefit on September 9 at the Rockaway Hotel in Queens, where Public Enemy rap icon Chuck D featuring Black Thought performed. The evening also featured a DJ set from R&B duo Lion Babe as well as performances by Los Hacheros and The Acapulco Express, Mark Ronson and others. A source says Ronson danced and sang along to Chuck D, who told the crowd, “I’ve never seen s–t like this in the Rockaways.”

Tongues are wagging that Sherri Shepherd, who recently relocated to New York City to film her talk show “Sherri” in Chelsea, was thrilled to have her photo taken with Janet Jackson at the recent Harlem Fashion Row’s 15th Anniversary Fashion Show & Style Awards at the General Grant National Memorial in Harlem. Jackson was presented with the Icon of the Year Award for her immense contribution to the music industry.

Critics hailed it as “authentic and gritty.” The film was “New Jack City.” Thirty years after its original release, theatrical hitmaker Je’ Caryous Johnson resurrects the record grossing crime thriller on stages across the country. Written, directed and produced by Je’ Caryous Johnson Entertainment, the touring stage adaption of the Warner Bros.’ cult classic kicks off its unprecedented run in Philadelphia on November 4-5, 2022 at The Met. The play will then travel from coast to coast during its run, including stops in Baltimore, Md., Washington, DC, Brooklyn, N.Y. and more. Johnson’s adaptation of  “New Jack City” stars Allen Payne, who will be reprising his role from the film as Gee Money, legendary Naughty By Nature rapper Treach as Nino Brown, Big Daddy Kane, and Flex Alexander as Pookie.