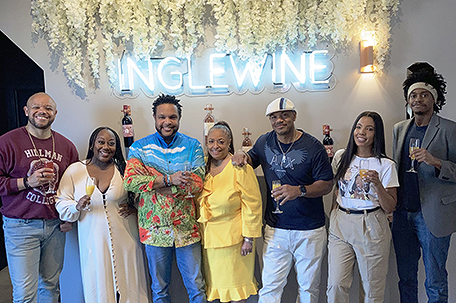 Superstar comedians are popping up at comedy clubs all over New York City. Word on the curb is Chris Rock did an hour comedy set on March 3 at the Comedy Cellar in Greenwich Village. A spywitness said that Rock, who will be a presenter at the Academy Awards on March 27, did the impromptu show in preparation for an upcoming tour. Meanwhile, It has also been reported that Rock’s good friend, Dave Chappelle, surprised the audience at the Blue Note Jazz Club the same evening by introducing his longtime friend, Talib Kweli, before the musician took the stage with his band, The Whiskey Boys…..

“Hit The Floor” actress Taylour Paige looked very happy at the Independent Spirit Awards on March 6 after picking up the award for Best Female Performance for her role as the title character in “Zola”, a stripper comedy-crime film. The movie was inspired by a Twitter thread posted by Aziah Zola King, in which she told the story of taking a road trip from Detroit to Tampa with a opal named Stefani, portrayed by Lisa Marie Presley’s daughter, Riley Keough. In her thank you speech, Paige called Riley her “best friend,” then gave special thanks to the real-life Zola. However, Paige did not thank Jesse Williams, so there must be some truth to the rumors that she and the former “Grey’s Anatomy” star are no longer dating……

As one of the co-sponsors of this year’s African American Film Critics Association Awards, #AAFCA13, #NissanDiversity graciously hosted a media group which included Jawn Murray, executive producer of “The Sherri Show,” Geneva S. Thomas, of People and “Entertainment Weekly,” Kimatni Rawlins. Yours Truly also attended the event, which took place at the SLS Hotel in Los Angeles. #NissanAtAAFCA’s two-day extravaganza featured a media dinner at the Sunset Marquis Hotel, where the celebrity guest was “Insecure” actor Jay Ellis, as well as a media brunch at the woman and Black-owned “1010 Wine Bar and Events” space in Inglewood, California. The awards ceremony was star-studded with winners and attendees, including Aunjanue Ellis, who won Best Supporting Actress for “King Richard,”“King Richard” director Reinaldo Marcus Green, Sherri Shepherd, Lee Daniels, the director of “The Harder They Fall,” Jeymes Samuel, with several of his cast members, including Deion Cole. Award-winning jazz musician Terrence Blanchard, Cassandra Freeman, who portrays Aunt Viv on “Belair” and Chante Adams from “Journal For Jordan” also attended. #AAFCA13 was founded by veteran film critic and author Gil Robertson.

One month after celebrating good times with concerts at casino land venues in Las Vegas and Atlantic City, legendary hit makers Kool & the Gang enter March 2022 with a series of shows in Nashville, Orlando and Fayetteville. The Grammy Award winning band will be performing at the Schermerhorn Symphony Center in Nashville, on March 13. A week later, they head toward Orlando, Florida, for two nights at the Walt Disney World Resort on March 20- 21 as part of the EPCOT International Flower & Garden Festival — Garden Rocks Concert Series. Then on March 26, the group will be at the Fayetteville Amphitheater in Georgia……..