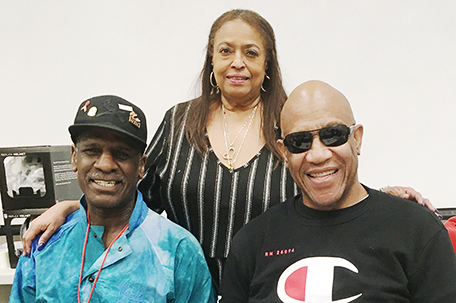 Tongues are wagging that Simone Biles gets the “Girlfriend of the Year” award. The superstar gymnast made Christmas come early for her boyfriend, Houston Texans safety,  Jonathan Owens by scoring the hottest gift of the holiday season for him, a brand new Playstation 5. Normally retailing for $500, the PS5 is going for bids on the internet as high as $1,000.In fact they went on sale on Bestbuy.com on December 15 at 9:00 am for $499, and the site crashed in four minutes. Meanwhile, the Olympic Gold medalist is reportedly also getting ready for the Tokyo Olympics, which were postponed from this summer to July 23, 2021, due to the pandemic……

Actor Tommy “Tiny” Lister, whom I first met back in the 90s, tested positive for COVID-19 nearly four months before his death on December 11, 2020, at the age of 62, after having reportedly exhibited COVID-like symptoms for a week. The “Friday” actor’s manager told People Magazine that Lister “wanted to be one of the first people to receive the vaccine because he wanted to be able to get back to normal so he could spend Christmas with his daughter.” Tiny was a great guy. May he rest in peace.  Two-division world champion boxer Michael Spinks and I spent time with him last January in Laredo, Texas, where the two of them did an autograph show together……….

Legendary comedian, actor, writer, producer, author and Twitter star, George Wallace released his newly anticipated book, “Bulltwit.. and Whatnot”, The Online Ramblings of GEORGE WALLACE with Foreword by Patton Oswalt. Wallace, also known as the New Mr. Las Vegas, has been a legendary staple in Hollywood and Las Vegas as a star whose longevity in comedy and as an actor and writer has defied most odds. Most recently, unexpectedly he has become a Twitter sensation and social media star, garnering over close to a million followers who adore his Twitter rants…..

In loving memory of our brother Maurice “Reese” Brown, who lost his battle with lung cancer on Saturday, December 5, 2020

Chadwick Boseman passed away at the age of 43