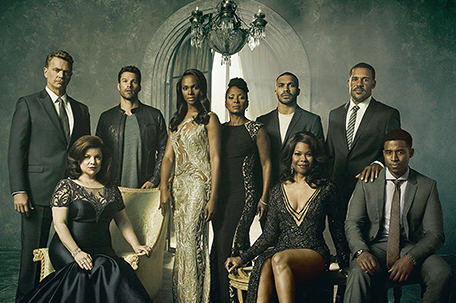 ABOVE PHOTO:  “The Haves and the Have Nots”

Funeral services were held for Natalie Cole on January 11 at West Angeles Church of God in Christ in Los Angeles. According to reports, tributes were made to the late legendary songbird by David Foster, Lionel Richie, Smokey Robinson and Cole’s sisters Timolin and Casey Cole. A source said that Stevie Wonder “brought down the house” with a moving musical rendition of “The Lord’s Prayer” and the Kurt Carr singers also performed. Notables who attended the service included Johnny Mathis, Gladys Knight, Chaka Khan, Natalie’s uncle Freddie Cole, Shaun Robinson and LaTanya Richardson Jackson. Aside from her sisters and uncle, Natalie is survived by her son Robert Yancy. Interment took place at Forest Lawn cemetery………

Sunday, January 11 was a sweet night for Taraji P. Henson as the “Empire” star walked away with her first Golden Globe for her groundbreaking role as Cookie on the Fox mega-hit. To celebrate, Henson handed out cookies as she walked to the stage to accept her statuette. When the teleprompter told her to wrap, Henson responded with, “Please wrap? I waited 20 years for this, you gonna wait.” The award marked the first-ever Golden Globe win for “Empire.” At the Fox/FX after party, the “Empire” crew, including Taraji, congregating at their private table, reunited after other quick party cameos. They reportedly all flew back to Chicago later that night on a private jet to resume work on the show the following morning……….

On January 8, OWN: Oprah Winfrey Network hosted a press luncheon at the Eventi Hotel in New York City. to celebrate the new seasons of their hit series “The Haves and the Have Nots” and “Love Thy Neighbor.” Show creator Tyler Perry along with cast members John Schneider, Angela Robinson, Palmer Williams Jr. and Patrice Lovely were in attendance to greet the 75 plus guests and participate in a press conference Q&A……..

On Sunday, January 17 at 3 p.m., for the 10th Annual Dr. Martin Luther King Jr. celebration, the Apollo Theater and WNYC will partner for a third year to present “Race and Privilege: Exploring MLK’s Two Americas,” as part of the Apollo’s Uptown Hall series. WNYC’s  Peabody Award-winning host Brian Lehrer and Jamie Floyd, local host of WNYC’s  All Things Considered, will moderate an open and honest discussion on disparity in America, looking at the persistence of institutional racism but also how individuals can combat racism everyday on multiple fronts. Guests include Eddie Glaude, Jr. Ph.D – Author and chair of Princeton University’s African-American Studies Department…..

Since we are chatting about Eddie Glaude, Jr., his book “Democracy In Black: How Race Still Enslaves the American Soul,” hit bookstores on January 12. “Democracy in Black” delivers a stirring reflection on the state of black America, making a grand argument as to how we’ve reached such an impossible place – and how we can change it…….

Terrence Howard and wife Miranda are expecting their first child together