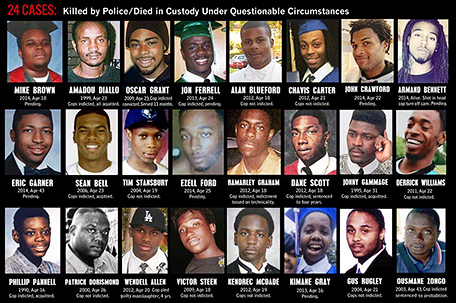 [Ed. Note:  For each week this month in the memory of SUN Publisher and Founder J. Whyatt Mondesire, we will feature some of Jerry’s FreedomQuest commentaries; providing his unique and provocative opinions on subjects from politics to entertainment]

Think of the decision by a St. Louis County Grand Jury not to indict former Ferguson, Missouri Police Officer Darren Wilson as a 21st century Emmett Till moment. For the thousands of Millennials who were too busy Facebooking, Tweeting and exchanging “selfies” to appreciate that thing we old-heads call the Civil Rights Movement, the killing of Michael Brown and the lack of criminal charges against the white police officer who gunned him down not only jolted them awake, but has also incited an urgent restlessness across an entire generation.

Thankfully, these Millennials have displayed a sustained outrage that few of us seniors would have predicted just three months ago when Brown was shot and left to die in the streets of Ferguson, located just outside St. Louis. Dozens of young protestors from every conceivable ethnic group and socio/economic class have either shown up in Ferguson or have participated in demonstrations in their own towns.

Surprisingly, a handful of NFL players from the St. Louis Rams responded to the events in Ferguson last week by holding up their hands in a salute to the “Hands Up, Don’t Shoot” mantra that has come to symbolize much of the protests in the Michael Brown case. A few days later, law students at the University of Pennsylvania held a “die-in” and laid down on the floor of the administration building in solidarity with the nearly five hours that Brown, 19, was allowed to lie on the street after being shot multiple times.

While the similarities between Brown’s killing and that of Till a half century ago don’t match completely, no one can deny that both homicides appear to have sparked spontaneous movements in which thousands of American citizens, fed up with the status quo, demanded fundamental policy and legal changes to better protect black lives. Till’s brutal murder by Ku Klux Klansmen in Mississippi was among the things cited by Rosa Parks as part of her decision making process when she refused to be “Jim Crowed” on a segregated bus in Montgomery, igniting the historic Montgomery Bus Boycott.

Simply put, half the country thinks the other half is in another universe, and in a sense they are.

Numerous older police brutality cases from Rodney King to Abner Louima to Louise Bumpers have been the impetus of public protests that rise and fall quickly. But this time, the generation most directly threatened by uncontrolled police violence has drawn its own line in the sand. So intense has been the national reaction that the normally tepid Obama White House felt compelled to speak out—not too loudly though. The president has vowed to find millions of dollars to outfit police with body cameras while also promising to develop an agenda to restore public trust in urban police departments.

Athletic footwear. Sneakers. Nikes, Adidas, Pumas, New Balance…take your pick. If we could convince just 10 percent of the teen and pre-teen market to withdraw support from one or more of these companies, body cameras would be subsidized for every major police department in the country. And if we could keep the boycott going as long as they did in Montgomery and it resulted in one or more of these companies opening a factory in the central core of several of our most distressed cities, then we’d finally begin to see a decrease in unemployment rates in black and brown communities.As these young protestors have shown, marches are useful in drawing attention to social problems. But actual change in a capitalist system always means somebody has to pay. Sometimes in money. Some times in blood.