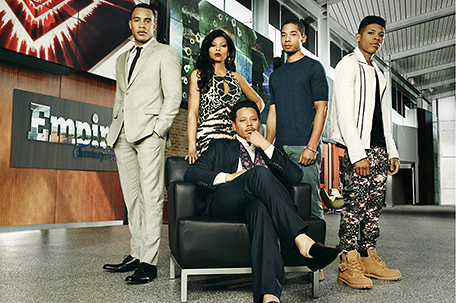 ABOVE PHOTO:  The cast of Fox-TV superhit drama “Empire.”

Choose from the adjectives above, as all of them describe me and thousands of other fans of “Empire,”which debuted on FOX-TV in January and instantly morphed into a new form of “video cocaine.”

A total of 9.8 million viewers became addicted making it one of the biggest hits of the current season with an even larger market share indicated for future episodes that will showcase well-known musical and hip-hop stars like Patti LaBelle and Snoop Dogg.

Philly-bred director/producer Lee Daniels certainly anticipated a following among the millennials since “Empire” revolves around some of the best new hip-hop sounds not yet released via the Internet. But it was the avalanche of baby boomers, like me, which shoved “Empire” into the mega success column.

Make no mistake, there is no overarching story line here or acting craftmanship like “Roots” or “Fences” to seduce a mature audience. Rather, it is Daniels’ deft use of big name talents like Cuba Gooding and Gladys Knight and sprinkling them liberally throughout the rather pedantic narrative about corporate power grabbing that keeps us returning for our weekly Wednesday “fix.” Having nearly every female character squeeze into a form fitting skirt or pair of hip-hugging pants adds an undeniable zest to the eye candy quotient as well.

Like other critics I was underwhelmed with the introductory episode, especially when I noticed leading man Terrence Howard had at least four different hairstyles (conked, curly, nappy and close-cut Afro) in the same one-hour intro. That kind of lack of continuity made a director of Daniels’s experience appear to be out of his depth.

Equally distressing in those early episodes was the incessant recurrence of bickering between the principle characters as though every scene was a dress rehearsal for a WWE smack down.

Trying to follow the formulaic style used in so many over-the-top dramas that have scored big on cable channels like “Game of Thrones” and “Ray Donovan,” Daniels sucked all of the emotion and nuance out of the interplay between the main characters so that each moment they shared on screen was fiercely explosive and confrontational. Even scenes involving sexual foreplay were needlessly incendiary. This left me feeling cheated because actors with the established credits of Howard and Taraji P. Henson, who plays his long imprisoned ex-wife, should be allowed to explore the complexities behind their emotions without always having to fall back on one-upmanship.

There is a subtext in the main story line involving African American male homophobia, which is probably directly traceable to Daniels’ own experiences. Sadly though, the homophobia theme is only seen in the reactions of various players. It’s gestation or evolution is never explored.

“Empire” almost completely lost me early too when it sunk to a cheap shot at President Barack Obama by allowing one of the juvenile leads, Bryshere Gray, who plays rapper Hakeem, to repudiate the first African American president as a “sell-out” based on his bi-racial heritage. A lot of my peers immediately equated the disrespectful news coverage the Obama administration receives on FOX news channels with this story line. But Daniels had Terrence Howard clean it up right away with a telephone call to the White House.

Creatively speaking “Empire” has the potential to reshape the way African Americans are portrayed on television. The director and the dynamic cast are all very talented and seem to be keenly aware of how the image of our race has been portrayed in the past. A hit series with attractive, articulate black villains and heroes would go a long way to realign the lopsided image of African American comedies, reality shows and athletic contests. For that kind of outcome I can stand to remain addicted for a few more seasons.