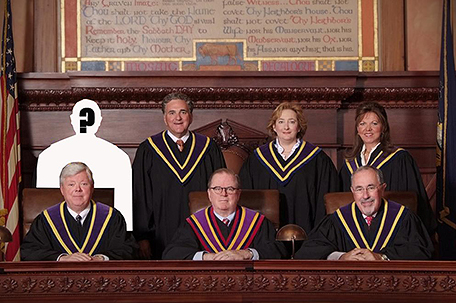 Moreover, with the abrupt retirement of former Justice Seamus McCaffery the state’s highest court will have three vacancies to fill next May, meaning the political chemistry of the court could be radically altered for the first time in more than a half century.

Currently, the seven-member Supreme Court has four members from the GOP and two Democrats, with Senate Democratic leaders telling the mainstream press they don’t intend to press Gov. Tom Corbett to name McCaffery’s replacement right away. The earliest it could be done in any scenario is Nov. 12, which is the only voting day left on the Senate calendar—a fact which barely gives the 50-member body time to advertise the name and vet the nominee’s financial disclosure forms; assuming the Governor acted so soon after an election he is expected by nearly everyone to lose.

So…what are we waiting for?

Now is the absolutely most opportune time to coalesce around an African American candidate for the Spring Primary. The party bosses were caught as flat footed as the rest of us when Justice McCafffery cut his deal to leave office thus curtailing any and all probes into his conduct and finances which might have jeopardized his lucrative pension. This means for the moment there is no anointed personality who can claim the seat based on political favors alone. But this vacuum will not last very long. And the Supreme Court is too big a prize to be remain chaste much beyond the holiday season.

The ideal African American candidate would, in my mind, be a woman in her late 40’s, professor or dean at a major law school, unblemished by previous political service with cross-over voter appeal; i.e. city vs. suburbs.

We don’t need a name yet. First we have to get the black clergy, black elected officials, black ward leaders, businessmen and women and community activists to agree on the concept. Once the concept is locked in everyone’s head then we can begin the struggle to find the personality that fits the profile to both get elected and to serve justly.

The second portion of this kind of wish list is always where we find the most trouble once the election euphoria has worn off.

Electing a black female justice in 2015 would make history, since the only other black woman on Pennsylvania’s Supreme Court, Justice Juanita Kidd Stout, served for just one year–courtesy of a 1988 gubernatorial appointment. Earlier, Justice Robert N. C. Nix won his first election in 1972, the year after his initial appointment by Gov. Milton Schapp and he served for Chief Justice for 12 years until retirement in 1996.

The reverberations of winning such a judicial post would even outlast any contributions that say, a “Governor Wolf” might provide in eight years, since the justice would serve (hopefully) until the mandatory retirement age of 70.

After electing three black mayors in Philadelphia (as well in several smaller cities such as York, Pennsylvania), a black District Attorney, dozens of local judges and legislative candidates throughout the state, surely we can elect one Supreme Court Justice once we unify on the idea. Yes, you read that right: U-N-I-F-Y !