Eric Holder: A brother worth remembering 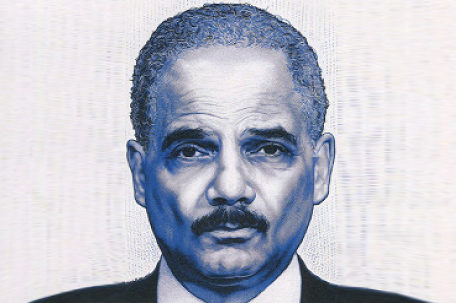 Listening to the television news coverage of U.S. Attorney General Eric Holder’s recent soulful retirement speech caused me to wish for an earlier era. The sight of a proud black man unafraid for six years to challenge the very essence of the American racial nightmare summoned up images of long ago leaders whose courage we so rarely see in the 21st century political marketplace.

“The Department (of Justice) has been restored—focused on the mission of protecting the American people,” declared Holder, the 82nd U.S. Attorney General and the first man of color to hold that position. Without even mentioning the name of President Barack Obama’s predecessor, Holder made it clear that the Justice Department he was leaving had been completely refilled with the moral authority George Bush’s administration had squandered when seven U.S. attorneys and the A.G. were ousted in 2006.

The leadership gap: so pronounced in so many arenas—education, churches, industry, politics—it’s taken for granted. What else explains how the face of Rev. Al Sharpton has become the default image of civil rights leadership whenever a racial incident is ignited; whether it’s Ferguson, Missouri; Baltimore,  or Sanford, Florida.

Why do so many HBCU presidents get ousted after just two-three years of service?

Why are the pastorates of so many black churches like North Philly’s Zion Baptist ending up in civil court battles?

What black elected official would you be proud to have sit at your Christmas dinner table?

If you were asked today whom to include in a mural of black leaders you would want your children to emulate; whom could you choose?

Celebrity and leadership have never been synonymous, even though our current paid-media saturated environment would make us believe differently. That is why the departure of Eric Holder will leave such a void. His concern about how contemporary mainstream media would “color” him never seemed to matter. Even when several rabid congressmen pushed for a contempt charge even as they failed to have him impeached, Holder remained unflappable, sometimes in defiance of his White House detractors.

Holder’s evolution as the chief “HBMIC” for the Obama administration was both a surprise and thrill to watch. (That’s “Head Black Man In Charge.”)

Based on his background as a first generation West Indian extract who attended an elite New York City high school and then Columbia University Law School before becoming a hard charging federal prosecutor and judge of the Superior Court of the District of Columbia, Holder would not appear as the kind of lawyer who would instinctively be ready to “throw down” whenever his or the president’s racial credentials where challenged at first glance.

In fact, some legal scholars who remembered how Holder fought so hard to put even petty marijuana users behind bars when he was U.S. Attorney for the nation’s capital, were shocked to see him take a much more nuanced position when questioned about how mass incarceration had decimated so many black families across the nation. Holder led the Justice Department’s recent crusade against unwarranted mandatory jail sentences for non-violent offenders.

Holder’s developing maturity was best seen in his behavior between the time Trayvon Martin was killed in Sanford, Florida in February 2012 and Michael Brown’s killing in Missouri last year. In the Martin case, Holder’s silence was paramount. But by the time Brown was gunned down by the white cop in Ferguson, the Attorney General became personally invested along with his whole department.

But it was his vocal and consistent defense of voting rights that sealed Holder’s crown of courageous leadership. When Republicans tried to gut the Voting Rights Act of 1965 with phony claims of protecting the franchise with photo ID laws, Holder unleashed his troops to bring lawsuits in states where the GOP held commanding majorities. In a speech at the NAACP in 2012, Holder declared that the Texas voter ID laws were a “political pretext to disenfranchise American citizens of their most precious right.” He compared the practices of several other states such as Alabama and North Carolina to those in the era of Jim Crow segregation. “Many of those without IDs would have to travel great distances to get them—and would struggle to pay for the documents they might need to obtain them. We call those poll taxes.” The basic humanity of Attorney General Holder was also evident whenever you dealt with him personally as so many in Washington came to find out over the past six years. And it was this core value which he carried with him during his total time in office that was first displayed in February 2009 when during a speech during Black History Month, he said, “Though this nation has proudly thought of itself as an ethnic melting pot in things racial, we have always been, and we, I believe, continue to be, in too many ways, essentially a nation of cowards.” He then added, “Though race-related issues continue to occupy a significant portion of our political discussion, and though there remain many unresolved racial issues in this nation, we, average Americans, simply do not talk enough about things racial.”

Holder’s enemies had a field day with televised jibes and hundreds of tweets and rants in the blogosphere. But in the end, the man never backed down and stepped off with his head held high.

Eric Holder on race: ‘We, as a Nation, have failed’