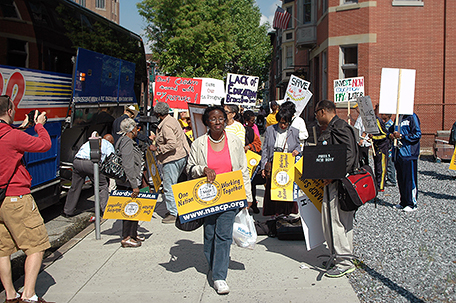 “Children’s March to Save Public Education”

[Ed. Note:  For each week this month in the memory of SUN Publisher and Founder J. Whyatt Mondesire, we will feature some of Jerry’s FreedomQuest commentaries; providing his unique and provocative opinions on subjects from politics to entertainment]

It’s 2011; the starting point of the second decade of a new century.

Democracy is breaking out in parts of globe where most rational people had no clue just a year ago that ordinary citizens would risk their lives to march unarmed in their streets demanding that entrenched dictators give up power.

But even as we remain glued to our TV sets watching those brave young citizens relying on social network connections taking to the streets to free themselves from autocrats and military strongmen, it is dark in America.  Yes, it is dark in the model nation so many around the world look to as a model of democratic government.

It is dark in America….dark and getting darker every with every sunrise. The promise once taken for granted that each American generation would prepare and insure a better world for the next generation is being attacked by the many right ring zealots who were elected to office in the past several years.

Gov. Tom Corbett and his Republican henchmen in the General Assembly have darkened the very bedrock of the American Dream. Like their co-conspirators in New Jersey and Wisconsin,these Pennsylvania politicians are trying to steal the implied promise that today’s America will prepare an path of uplift for tomorrow’s America. Education from grade school to college is under assault throughout our great Commonwealth.

From Pittsburgh to Altoona to State College to Chester to Radnor to Philadelphia, Gov. Corbett’s budget cuts are about to dismantle the public education that most of us have taken for granted for more than a century. Gov. Corbett wants to snatch $1.2 billion from secondary schools and our public colleges.

All-day kindergarten-programs for homeless children? Gone…wiped out by the Corbett budget.

Not only would teachers be laid off, nurses and security officers would be gone too.

Art, music, even physical education will be so severely cut that their very existence will be questionable if these cuts are allowed to become law. Cheney and Lincoln Universities, two of the nation’s oldest Historically Black Colleges and Universities could face closure at worst and steep tuition increases at best.  Penn State and the 14 other state-related colleges would see tuition almost double.

In Centre County, Penn State alone would lose more than half its state funding, while a few miles away, $200 million is being spent to build a new 2,000-inmate prison.

But, there’s still more darkness in this governor’s idea of a public budget. The cuts he has called for would strip money more harshly from the poor school districts statewide than from those richer districts where the real estate tax base is strongest.

The golden doors of opportunity are closing on America’s young. The United States, once the world’s leader in the percentage of young people with college degrees, is now a sorry 12th among 36 developed nations, according to the College Board.

A governmental budget is a statement of priorities. It reflects what politicians rate as those programs that need to thrive and those which are unworthy.

Gov. Corbett and his Republican majority in both houses of the legislature have written an immoral budget, which assists the rich in protecting their already lopsided fortunes. In today’s America, the richest 5 percent of the population control more of the country’s wealth than the other 80 percent of American families.

And most shameful of all is Corbett’s inherent message that our youth don’t count today and their dreams for tomorrow count for even less. Instead of a moral document that strengthens the promise to future American generations, this document chooses to spend more on prisons even when every study has shown the fastest way to grow the prison population is to weaken the chances for young people to get the kind of education they need to compete in this new global economy.

Unfortunately, our state is symptomatic of the misplaced priorities we’ve seen in other Republican dominated states. During the past 20 years, state spending on prisons has increased at six times the rate of spending on higher education.

And in this budget year alone, while Gov. Corbett slashed and burned $1.2 billion from education he increased spending on prisons by 11 percent to almost $1.9 billion.

The NAACP says no to this education budget.

The NAACP has fought since its inception 101 years ago to end racial discrimination and lynch mobs and will never rest until we reverse these budget priorities.

We are here today to demand that our legislators throw out this outrageous and destructive plan.

Peaceful debate and compromise are the tools we have chosen today.

But, the governor and those who think like him should know that we will not rest when these thousands of children leave for home today.

The fight to save public education is too important to accept failure.

The NAACP and our allies are prepared to seek relief in the courts if that should become necessary.

We have a moral debt to prepare the children here today with the best.

Second class will never be good enough for our children whether they be black, white, brown or yellow or come from rich homes or live in trailer parks or housing projects.

Those who defended Jim Crow, those who refused to outlaw lynching, those who fought giving women and young people the right to vote once darkened America’s promise too. They too once looked too strong to be defeated.

But in the end they were defeated when the people rose in righteous indignation to demand that the promise of the Declaration of Independence and the Constitution be extended to all Americans.

Today, we stand on these capitol steps to say this generation of Americans will never allow any political clique to darken the promise we owe America’s children.