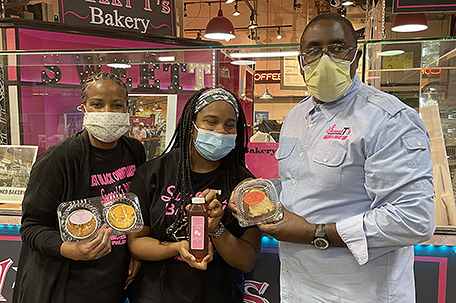 ABOBE PHOTO: From (l-r) Tia El, daughter Lamirah and husband Mark show off some of the tasty treats you can find at Sweet T’s Bakery in the Reading Terminal Market. Sweet T’s is the first Black-owned bakery to operate in the Market in it’s 129-year history.  (Photo by Denise Clay-Murray)

At Sweet T’s Bakery in the Reading Terminal Market, a Thanksgiving favorite is served year-round.

In most African American families, a sweet potato pie is a big part of the Thanksgiving dessert table.

But if you don’t want to wait until then to have that delicacy, a new bakery in the Reading Terminal Market can satisfy your craving for sweet potato pie, and a whole lot more.

Sweet T’s Bakery, located on the Arch Street side of the market near the Dutch Eating Place, is using the sweet potato for a selection of sweets that includes cupcakes, pound cakes and even cheesecakes. It has also made history as the first Black-owned bakery to occupy a space in the 129-year-old market.

Tia El and her husband Mark have been helping people get their sweet potato fix since 2014.

“I’ve been baking for years,” she said. “I was always known for making sweet potato pies. It was a recipe that was handed down by my grandmother, but once she showed me the recipe, I put my own twist on it. Instead of using a regular crust, my pie has a graham cracker crust.”

The Els became part of the Reading Terminal Market family in 2020, Mark said. There wasn’t a space for them at first, but the couple’s persistence paid off, he said.

“We had submitted various applications and there were no spaces available,” Mark El said. In late fall 2020, [Tia] called down to the market and asked if they had any available space. And [former General Manager Conor Murphy] answered the phone and told my wife to come in and talk about what she has to offer the market because he’s going in a direction to make the market more diverse. So, at that meeting, we were told that all they had available was a pop-up cart, one of the brown wagons that sit in the front of the market. We had two days allotted to us, Fridays and Saturdays.”

And just like they were a hit on the pop-up cart, they’ve managed to be a hit in their new space. The sweet potato pie is just the right combination of sweet and spicy and the sweet potato cupcakes have a maple, cream cheese frosting that compliments the cake it tops very well.

Although Sweet T’s is literally surrounded by bakeries — Bieler’s Bakery and Donuts, the Metropolitan Bakery, and the Flying Monkey Bakery are all nearby — it has managed to find its niche.

“We have a lot of people who are returning customers,” Tia El said. “We’re really getting a great response from everybody.”

The Els are hoping that the great response they’ve gotten for their baked goods leads to other bakeries run by people of color trying to take their best shot, they say. They want to encourage the next generation of bakers, they say.

“This means that we’re trailblazers,” Mark El said. “We have become someone that young bakers can identify with.”

“Actually, it feels great to be the first one,” Tia El said. “I’m glad that we were able to make a way for others.

We get a lot of emails in our inbox from people who say that they’re glad we’re here and that we’ve paved the way for other people.”

While they don’t have any vegan offerings at the moment, Tia El is working on some gluten free offerings for Sweet T’s, she said.

And with the exception of her 7-Up cake, and the iced teas and lemonades they sell at the bakery, everything will put the sweet potato front and center.

“We’ll always feature the sweet potato,” she said. “I have a lot more recipes that I’ll be introducing at different times.”

If you want to have a little bit of Thanksgiving anytime you want, Sweet T’s is open from Tuesday-Saturday from 10am-6pm. They’re closed on Sundays and Mondays, but you can order online at www.sweettsbakery.co. You can also find Sweet T’s on Facebook at Sweet T’s Bakery and Snack Shop and on Instagram on Sweett.

And by the way, Sweet T’s will soon begin taking Thanksgiving orders for their sweet potato confections.

Try sweet potatoes for a healthy, flavorful addition to your family dinners