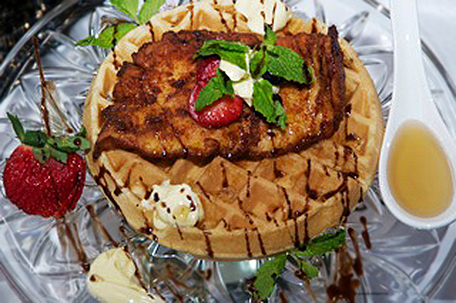 ABOVE PHOTO:  This delicious chicken and waffles is only one dish to come at the new A’s Place, formerly the Manayunk Diner, soon to reopen under new manager Adrienne Cater.  (Photo by H Michael Hammie)

With A’s Place, Adrienne Cater is making an iconic space her own

Once upon a time, the Manayunk Diner was one of my favorite hangs.

My Significant Other and I used to hit the diner at the entrance to Manayunk’s famed Main Street after hitting a concert at the Keswick Theater or just because we felt like driving from South Philly for a seafood salad sandwich (him) and some blueberry pancakes and turkey bacon (me). 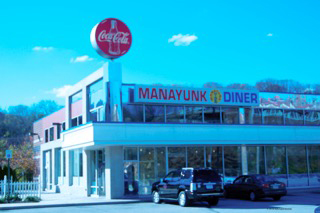 But it had been a while since we’ve been there, which is why I didn’t know that the joint has been closed for much of the last 10 years.

“There was some instability and a lack of consistency here,” said Councilman Curtis Jones, whose district includes the diner. “The food should taste the same in January as it does in July.”

Because of that lack of consistency, customers stopped coming. Eventually, the diner closed completely.

So when my friend Mannwell Glenn reached out to me about the reopening of the Manayunk Diner, which is how I found out it had closed in the first place, I was kinda interested in seeing what’s up. 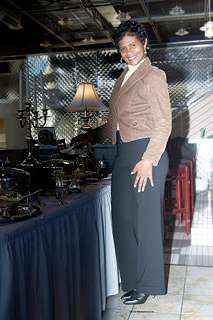 When he told me that that the new owner was a friend of his named Adrienne Cater, the only African American woman I know in town to own a diner in the city, I had to check it out.

So earlier this week, I went to what’s about to become A’s Place, or The Space Formerly Known As The Manayunk Diner, to talk to Cater about her plans for the space.

Cater’s got some changes planned, changes she’s really excited about.

“There’s going to be a stage right here,” Cater said, smiling as she points to a section in the back of what was the diner’s main room. “We’re going to have live entertainment here. There’s going to be high-top seating along the wall so that you can see the stage…”

“We’re also going to have a Sunday jazz brunch…” she continued.

In other words, she wants to put something together that gives a possible nightlife venue to a group of people that doesn’t have a lot to choose from here in Philly at the moment.

“I want to create something upscale for a mature crowd,” Cater said. “There aren’t a lot of venues for people who are 40 and over.”

Like I said, Cater, who also owns the Reach For The Stars Child Care Center on Cheltenham Avenue, is really excited about her plans for the space.

But since this is a food column, I was wondering what the menu would look like. Fortunately, I got a sample.

There will be two chefs—Bernard Talley and Orville Ross—preparing the food you’ll get at A’s Place. On the day I visited, Talley served chicken and waffles with a maple syrup glaze, truffle butter, sliced strawberries and blueberries.

It was one of the best meals I’ve had in a while. The chicken was crispy on the outside, juicy on the inside, and not at all greasy. The waffle held it’s own and while it was nice to have syrup, you really didn’t need it. While I love blueberry pancakes, I’d happily come back to A’s Place for this. It’s worth the trip.

A’s Place has it’s official opening on New Year’s Eve. Starting New Year’s Day, it’ll be open for breakfast and will be open 24-hours on Fridays and Saturdays, like the Manayunk Diner used to be.

And from what I understand, you’ll be able to get blueberry pancakes if you want ‘em…