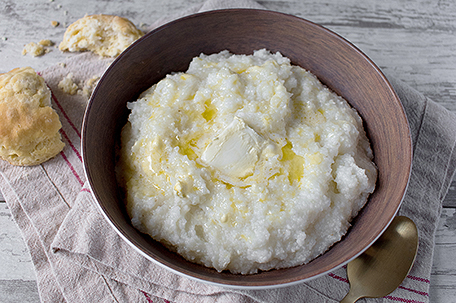 Once you get past the inherent silliness of #TeamButter or #TeamSugar when it comes to grits, there’s an economic discussion it can lead us into.

Because I try not to engage in debates that look like they’re going to take a long time due to deadlines and such, I didn’t really intend to weigh in on what I’m calling The Great Grits Debate.

For months, Black folks on Twitter have been debating the merits of sugar vs. salt on grits. As food debates go, it’s been kind of intense, and more than a little funny as folks passionately made points like “You don’t put sugar on grits! You put it on Cream of Wheat!” and “Sugar on grits is good!”

But it might be time for us to stop being so doctrinaire about that because times are hard, and we need to consider why someone might be putting sugar in that bowl of grits.

Now I grew up in a home where we didn’t eat grits a whole lot. Despite my parents being from Kentucky, there were certain things that they stopped eating when they came up North because they had eaten them almost constantly as kids, and grits were one of those things.

(I still remember the day that my brother brought mutton, or ground lamb, home by mistake instead of ground beef. You would have thought that he set the house on fire.)

But when I went to visit relatives in Kentucky, my Aunt Lucille made them, and they were tasty. Granted, they were swimming in butter, so they weren’t for the dietetically conscious, but they were really good.

I make them myself, usually with shrimp, cheddar cheese, andouille sausage, red peppers and onions. I’ve also had them in diners, where they were kinda seasoning optional.

But when it comes to sugar, that’s usually in the form of the honey that I use to season the steel cut oatmeal with cinnamon and raisins that I make every once in a while.

So, when I said that sugar doesn’t belong in grits, I meant it.

However, one of the responses to my tweet has given me some food for thought and I have City Councilmember Kenyatta Johnson to thank.

Councilmember Johnson is on #TeamSugar. When I responded by saying that sugar was for oatmeal and Cream of Wheat, he asked me something I hadn’t considered.

“What if that’s all you have to eat?”

So, while he has no problem having grits the traditional way with salt, pepper, butter and hot sauce (?), you go with what’s in the house when you’re hungry, Johnson said.

And at that moment, I saw just how much of a first-world problem the whole #TeamSalt vs. #TeamSugar over grits actually is. So, while I still like mine with butter, cheese, salt and pepper, I also acknowledge that the fact that my ability to make my grits this way is directly connected to the choices that my husband and I can make in this regard.

Personally, I’d like to make it so everyone can make those choices.

Now, if you’ll excuse me, I’m going to grab some toast and syrup. I forgot just how good that actually is.

Red velvet for your valentine

Spice up your menu with these unique recipes