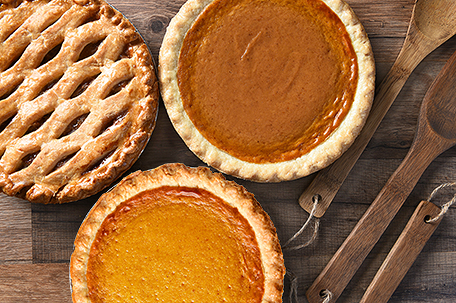 Holiday desserts are going to take center stage at next week’s Thanksgiving table. For many of us, that means pumpkin or sweet potato pie. But not all of us…

In case you spend a lot less time watching the Food Network than I do, the World Series Of Holiday Feasting begins on Thursday with Thanksgiving.

But while many of us are focusing on when to thaw the turkey, if we have enough cheese for the macaroni and cheese, and how you can make sure that your brother’s vegan fiancée gets something to eat that’s more than the roasted brussels sprouts you gave her last year, some of us are looking right at the dessert table.

For most of us, that begins and ends with either pumpkin or sweet potato pie. So I put the following question on my Facebook and Twitter pages: Are you a pumpkin person, a sweet potato person, or none of the above? I also asked about Thanksgiving cake.

But while I was waiting for my friends to answer, I figured I’d get a little bit of the history of why pumpkin pie vs.sweet potato pie seems to be the debate we have when it comes to Thanksgiving desserts.

So I reached out to someone who knows more about the history of this debate than I do. Chef Peter Kelly is a professor at Johnson and Wales University in Providence, Rhode Island. In addition to being one of the first professors at the university to teach the school’s Science of Cooking and Sensory Analysis class, he’s also an expert on food history and seasonal cuisine.

Now the first Thanksgiving was kind of lean because the pilgrims were just trying to survive, Kelly said. While they had learned how to grow pumpkins, or squash from the indigenous people they were living among, most of the other ingredients needed to make the pies that we know and eat on Turkey Day weren’t necessarily available to them, he said.

“The filling we know today has dairy and egg which was quite rare and dear then and would not have been used to make dessert,” Kelly said. “It’s more likely that a roasted pumpkin might have been seasoned with honey and served as a side dish or in a “quick bread. Keeping in mind that the “pilgrims” were English, if any pies were served, it’s likely they would have been meat pies.”

Christopher Columbus brought the sweet potato to Europe from the Dominican Republic, but it didn’t catch on right away because Europeans were suspicious of them like they were of many things that grew up from the ground, Kelly said.

“They kept them as plants,” he said. “It wasn’t until poor people, like their gardeners started eating them that they figured they were good to eat.”

While I was talking with Chef Kelly, I got some responses from my friends regarding their pie preferences. They reflected something else that the chef said, which was that access plays as big a part in your pie preference as anything else.

“Like a lot of foods, who you are, where you are from and what your life experience has been makes all the difference,” Kelly said. “The sweet potato became a huge cash crop in the American Deep South, they were cheap and plentiful, and it was a natural progression to see them in all manner of treatments, sweet and savory. The more accessible the item, the more popular it became.”

It’s certainly popular with the majority of my friends. My friend Danyl says that pumpkin is a spice, not a pie, so she’s definitely in the sweet potato camp. as are James, Jim and Carla, who says that squash and pumpkin are “northern delicacies”. Mariya, who is the designated baker for her Thanksgiving dinner, says sweet potato is a must for her family.

For Richard, and Kathia, it’s pumpkin pie. In fact, Kathia also talked about a pumpkin cake that she had enjoyed. Daniel and Peg are also pumpkin fans, although Peg also brought up shoo-fly pie, which just makes my blood sugar go up 200 points just thinking about it.

My friend Sandra says she eats pumpkin pie every year because it was a tradition in her household.

In fact, Kelly said, tradition and access are the biggest predictors of what kind of pie floats your boat. And while it’s possible to love both pies, it’s kind of rare.

“It’s human nature,” he said. “I’ve only ever had this, at this time, in this place, so it’s MINE” I do think that there is every opportunity for people to love both, and that might be the foodie, the person who travels, who is adventurous. I’m not sure that those descriptors fit a huge number of people, Television Food Network notwithstanding. I’d add it into the white meat versus dark meat, vanilla versus chocolate, nuts in the brownies or not category. People love to hold on to their traditions.”

But while sweet potato vs. pumpkin is the recognized Thanksgiving Pie debate, it’s not the only game in town for everyone. My friend Jerry says pecan pie is his favorite for Thanksgiving due to his Southern heritage, while my friend Tony, who moved to the South through the military, feels the same.

My friend Melissa makes a chocolate bourbon pecan pie that I have to get the recipe for because it sounds really good…and really different.

Meanwhile, my fiance’ Chris has requested a peach cobbler for Thanksgiving.

But most dessert tables will feature a pumpkin or sweet potato pie on Thursday..

“Sweet potatoes and pumpkins, at least in New England, or the Greater Northeast, are fall harvests,” Kelly said. “It’s also important to remember that these are storage crops, easily kept in the root cellar or the barn, without much baby-sitting needed for the winter, or what used to be called the “starving time” when there was very little fresh food to be had.”

“With the name Peter, I’ve heard the ” Peter Peter Pumpkin Eater” rhyme since I was a child,” Kelly continued, “and oddly enough, it just does not feel like Thanksgiving without the pumpkin pies.”

Now if you want to try your hand at making a classic pumpkin pie, here is a recipe. I’m also including a recipe for pie crust, which you might be able to use to make any pie you want.

Reduce oven temperature to 350 degrees F and continue baking 35 to 40 minutes or until knife inserted 1 inch from crust comes out clean. Cool. Garnish as desired. Store leftovers covered in refrigerator.

Combine flour and salt in a large bowl. Cut in shortening until it resembles coarse crumbs.

Mix egg, water, and vinegar together in a separate bowl. Pour into flour all at once and blend with a fork until dough forms into a ball. Divide into 3 equal-sized rounds.

Wrap with plastic and chill in a refrigerator until ready to prepare.

Stuffing: The essential Thanksgiving side dish