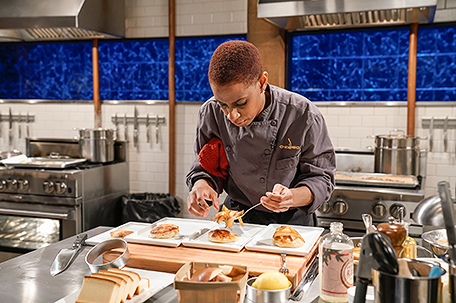 Anyone who is a fan of the Food Network show “Chopped” knows that the baskets the chefs competing on the show contain a whole lot of things that if you saw them on your grocer’s shelves, you’d walk right past them.

So it probably wasn’t all that big a surprise to Philadelphia-based Chef Kristol Bryant that among the basket items to start her stint on the popular culinary competition show was cold hot dog pie, which consisted of…

“They minced the hot dogs,” she said, “And the minced meat looked like dog food or cat food. They had buns for a crust, and there was ketchup and mustard on top of it and relish in the middle. “

“It was the worst thing I’ve ever seen,” Bryant continued. “Now, I eat anything because I’m a chef. I eat it. I taste it. I smell it. But I did not eat this. I was like, “Who’d eat this?! Who would come up with this?! It was horrible. I made a face, and I didn’t know I had made that face until I watched the show. I lost all sense of culinary skill or common sense.”

Despite having to come up with a plan B after sautéing it turned the culinary curiosity into something even more inedible, Bryant managed to meet the challenge and win it all.

“It felt amazing to win,” she said. “It felt awesome. It gave me a sense of validation going up against other chefs from other states. I cried at the end of it.”

It was also another step toward greatness in a career that’s had quite a few of them.

The William Penn High School graduate discovered the culinary arts at an early age by watching her mother, Barbara, cook amazing meals in spite of not having a lot to work with, Bryant said.

Mom’s brand of cooking wasn’t by the book, she said.

“When I cooked with my mom, there were no recipes, I just learned from her.” Bryant said. “I had to make the transition from home cook to professional cook and it was two different world because I was just used to creating with my heart and not so much from a book. I got so good at tasting and smelling food that my Mom would call me and ask me to taste things and make sure they were right.”

Bryant, who had at one time considered becoming a lawyer, got a scholarship to Newman College and was trying to go to school while taking care of her son, Shawn. But the hours of travel on public transit, going to school and time away from her son made her decide to drop out of college, get on public assistance, and think of another way to get to her ultimate goal while taking care of her responsibilities.

It was during that time that she returned to professional cooking as a dream through discovering the Opportunities Industrialization Center’s Culinary Arts program. One day, a flyer detailing OIC’s programs for those looking for a way to their next step came in the mail, Bryant said.

Her eyes landed in one spot: the Culinary Arts program. She called the number, did an interview and take the placement tests, and began the trek toward that cold hot dog pie.

‘I loved it!”, Bryant said. “I absolutely loved it! I was like a sponge. I was soaking everything up. I just loved the program. It gave me the foundation to build my career on. Without a strong foundation, it may stand for a little bit, but it won’t stand the test of time.”

Her willingness to learn everything possible in the kitchen really impressed Chef Chalie Schmidt, the lead teacher for OIC’s program. So when Bryant wanted the challenge of learning with the best and most demanding chefs in Philadelphia, Schmidt made sure she got it.

“She was a very young girl, and she showed promise,” Schmidt said. “And she surprised me. So I started her on a journey, because she ran most of the journey herself, with French chefs in Philadelphia, which are historically the hardest, the most aggressive in a sense, and she really blossomed in that environment.”

Bryant’s first experience with these titans of the kitchen was as an extern with Master Chef of France Philippe Chin at his restaurant Philippe On Locust. She worked with Chin’s pastry chef Michael Vandergeest at the French/Asian fusion restaurant, which also helped her make the transition from home cook to professional chef, she said. Once she finished school, that externship turned into her first job, she said.

Being a professional in the culinary world as a woman required some getting used to, Bryant said. According to a 2014 Bloomberg study, less than 7 percent of the nation’s restaurants are run by women, which means that the kitchens are predominately male… and the language is a little salty.

“I had to get used to how these men talked and how they conducted themselves,” Bryant said. “So, I got this mentality that said ‘You will not see my body. You won’t be judging me on how I look, and you won’t see me asking you to lift a 60lb bag of anything for me because I’m competitive. I’m as strong and a good as you are.”’

From there, the William Penn High School graduate has gone on to serve as chef du cuisine at the XIX Restaurant at the Hotel Atop The Bellevue (she was also part of the team that opened it), the executive chef at the Sonesta Hotel, and was one of the chefs selected for the Friday Night Super Bowl Party at the 2014 game in Phoenix. She’s also been named one of the city’s best chef by Thrillist Magazine and is the person who makes the food sold on QVC look appetizing as the network’s food stylist.

It was at those venues that Bryant got to go from cooking assigned to her to preparing the meals that interested her, she said.

“If you watched ‘Chopped,’” she said, “You heard me say that it’s ‘homey’. I let the ingredients speak and I cook how I feel. It’s American, eclectic and filled with different flavor profiles. I don’t get stuck on one ingredient. I like to be versatile and because I’ve studied French and French-Asian fusion, and took things from my Mom, I put all of those things in my pocket and use it for my own cuisine.”

It was the recognition she’s received for her work that brought her to the attention of the Food Network. Before landing on “Chopped,” Bryant had applied to be “The Next Food Network Star” and for Bravo’s “Top Chef,” she said.

After a while, she had gotten the hang of applying for these shows so when “Chopped” came calling, she was ready, Bryant said.

Much of Bryant’s inspiration for all she’s done has been making the best possible life for her children. While making it as a chef takes a lot of time and hard work, the mother of four — in addition to son Shawn, 22, she two daughters, Faith, 20 and Imani, 17, and another son, Amere, 15 —- was had to do it alone when her husband left her.

Although he had left her in a bad situation —- he had controlled everything, including the family finances —- she had to make things happen, Bryant said.

“I had to carve out a career when my husband left,” she said. “My kids were young and I had to figure things out immediately. I had no time to wallow and cry because I became a single parent in a matter of seconds. I had just started working for Hyatt and asked for more shifts. I worked overnights and then worked the day shift while my kids were in school. I had to drop off the kids at my Mom’s house and my sister had a day care center, so they helped me.”

Now that she‘s shown an ability to make Hot Dog Pie into something edible, Bryant is doing a variety of things. She’s currently working for the cable shopping network QVC as a food stylist, making the food products the network sells look inviting. She also has a YouTube channel and is working on a line of clothing and shoes that will allow female chefs to look as good as they cook.

“I feel like that’s a missing factor,” she said. “We have clothes for women in the corporate world, and for women who do appearances who aren’t always in the kitchen. But chef’s clothing is always based off of men’s clothes. It’s not feminine. It’s not fashion forward. I love fashion. My clothes are tailored to women and feature chef’s jackets, skirts, dresses, jumpers shoes and sneakers.”

But she hasn’t completely abandoned cooking. If you want to have a high-end restaurant experience without leaving home, Bryant offers the chance to have that experience. Everything from waiters and waitresses to table cloths and wine pairings is available, starting at $125.

You’ll also get the chance to see the next generation of chefs from the OIC culinary program. In addition to using them as interns for her QVC work, Bryant, who joins singer Gerald Alston as one of OIC America’s Celebrity Ambassadors, has them work with her with her private dining clients.

“I have gotten to work with a lot of great chefs and celebrities,” Bryant said. “But I also enjoy getting to come back to OIC and mentor [the students] on this whole new world in the culinary arts field.”

If you want to follow Chef Bryant, you can find her on Instagram at @ChefKristol. You can can also go to her website, www.k1893.com to schedule a private dinner and to www.aliveshoes/adje’ to check out her line of stylish footwear for the chef in your life.

Cooking Up Couture raise more than $3000 for Philabundance

A Hearty Breakfast to Start Your Day